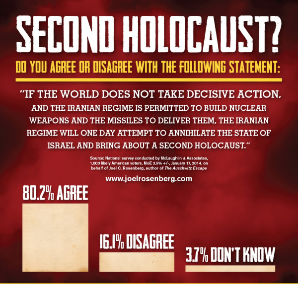 (New York City, New York) — An Iranian official this week attacked an op-ed I recently wrote with Senator Santorum for CNN.com as “ludicrous, counterproductive and unfortunate.”

You can read our original op-ed here, and the Iranian official’s op-ed here.

Here is Senator Santorum’s and my response:

The American people are not fooled by the lies of Ayatollah Khamenei and his regime. Americans understand that Iran’s illegal nuclear program poses a grave danger to U.S. national security, to Israel, to NATO, and to our Arab allies in the Middle East.

As we stated in our column, a new poll shows that 80% of Americans fear a “Second Holocaust” if the world allows Iran to build nuclear weapons and the missiles to deliver them. Given that the Khamenei regime is one of the world’s worst state sponsors of terror, Americans are right to be so deeply concerned