The Christian Broadcasting Network’s flagship television program, The 700 Club, is a talk show combining news, social commentary, human interest interviews, and responses to questions and prayer requests received by phone or email. The show has been running since 1966, born out of telethons for CBN during which the station’s founder, Pat Robertson, requested 700 people to support CBN monthly. The original show included various interviews, performances, and call-in questions or prayer requests. Today, Pat Robertson is still the main host, while his son, Gordon, has taken over as CEO of CBN.

It should be noted that using television or a talk show format is not inherently wrong or unbiblical, any more than radio, newspapers, or the internet is. Television is simply another form of communication that can be used in many ways. Christian-themed information and the gospel can indeed be communicated effectively through various television formats.

However, The 700 Club itself is not an ideal source for biblical information. Pat Robertson has become well known for his comments about natural disasters, 9–11, homosexuals, and many other hot topics. The way Robertson has expressed his opinions has sometimes been inconsiderate and inappropriate for someone who claims to love others with the love of Jesus. Aside from their social unsuitability, Pat Robertson’s statements on current events are often far from what most Christians would consider to be true about God and the Bible.

Conversion therapy, also known as reparative therapy, is a blanket term used to describe various methods to “cure” people of homosexuality. In the past century, various psychiatrists, Christian and non-Christian, have proposed techniques for “converting” a homosexual into a heterosexual. In recent years, the psychiatric community has begun to strongly oppose conversion therapy, declaring it to be psychologically and emotionally harmful. Even some Christian groups that formerly advocated Bible-focused methods of conversion/reparative therapy have abandoned the efforts. Is conversion therapy biblical?

The Bible clearly declares homosexuality to be a sin (Romans 1:26–27; 1 Corinthians 6:9) and that any sin can, with God’s help, be overcome (Romans 6:17–18; 1 Corinthians 6:11; James 4:7–8). However, the Bible does not give a specific methodology for overcoming any particular sin. There is no 5-step process for gaining victory over lying. There is no 11-step program for defeating an addiction to pornography or sexual immorality. There is no silver bullet. There is no magic potion.

But a rejection of the specific methods used in conversion/reparative therapy is not the same thing as surrendering to the idea that homosexuality cannot be overcome. There are literally thousands of individuals who have achieved lasting victory over homosexual tendencies and temptations through faith in Jesus Christ. Far more important than testimonials is the biblical teaching that sin can be overcome. To say that faith in Jesus Christ, a commitment to obeying God’s Word, and a reliance on the power of the Holy Spirit cannot produce victory over sin is an affront to the love and power of God.

Sins, including homosexuality, can be overcome. Paul reminded the believers in Corinth that, before they received Christ, some of them were homosexuals, “but you were washed, you were sanctified, you were justified in the name of the Lord Jesus Christ and by the Spirit of our God” (1 Corinthians 6:11). Their homosexuality was a sin of the past, abandoned by the grace of God. Only when we are new creations in Christ (2 Corinthians 5:17) can our sin natures be defeated. Only when we truly experience conversion to Christ can any true reparative process begin (Romans 12:1–2).[1]

Jesus is described as the author and perfecter, or finisher, of our faith in Hebrews 12:2. An author is an originator or creator, as of a theory or plan. The Greek word translated “author” in Hebrews 12:2 can also mean “captain,” “chief leader” or “prince.” Acts 3:15 uses the same word: “And killed the Prince of life, whom God hath raised from the dead; whereof we are witnesses” (KJV), while the NIV and ESV use the word “author” instead of “prince.” From this we can deduce that Christ is the originator of our faith in that He begins it, as well as the captain and prince or our faith. This indicates that Jesus controls our faith, steers it as a captain steers a ship, and presides over it and cares for it as a monarch presides over and cares for his people.

The Greek word translated “perfecter” in Hebrews 12:2 appears only this one time in the New Testament. It means literally “completer” or “finisher” and speaks of bringing something to its conclusion. Putting the two words together, we see that Jesus, as God, both creates and sustains our faith. We know that saving faith is a gift from God, not something we come up with on our own (Ephesians 2:8–9), and that gift comes from Christ, its creator. He is also the sustainer of our faith, meaning that true saving faith cannot be lost, taken away or given away. This is a source of great comfort to believers, especially in times of doubt and spiritual struggles. Christ has created our faith and He will watch over it, care for it, and sustain it.

It is important for us to understand that God in Christ is not only the creator and sustainer of our saving faith, but He is also the sustainer of our daily walk and the finisher of our spiritual journey. For if God in Christ is not the author of our new life, and if Christ is not the finisher and perfecter of our faith through the Holy Spirit’s indwelling power, then we are neither born again nor are we a true follower of Christ. “And I am sure of this, that he who began a good work in you will bring it to completion at the day of Jesus Christ.” “In him you also, when you heard the word of truth, the gospel of your salvation, and believed in him, were sealed with the promised Holy Spirit, who is the guarantee of our inheritance until we acquire possession of it, to the praise of his glory” (Philippians 1:6; Ephesians 1:13–14).[1]

We have to die to ourselves.

It’s that simple. Yet, it can be the most difficult lifestyle to apply.

24 Then Jesus said to His disciples, “If anyone desires to come after Me, let him deny himself, and take up his cross, and follow Me.”

That’s pretty clear and straightforward. Deny ourselves. It’s a phrase that’s used a lot in Christian circles, but do we truly know what it means to deny ourselves?

If we have boundaries, walls, or barriers built up, we haven’t died to ourselves.

The Gospel isn’t about us. It’s about the finished work of the Cross. We are birthed into this world with a self mentality because of what happened…

Ligoner Ministry has made available for free R. C. Sproul’s book on Suffering for the month of August!  Here is the book’s description from their website:

In Surprised by Suffering, R.C. Sproul argues that we should expect pain and sorrow in this life. Some are actually called to a “vocation” of suffering, and all of us are called to undergo the ultimate suffering of death. God promises in His Word that difficult times will come upon us, but He also promises that He allows suffering for our good and His glory, and He will never give us more than we can bear with His help.

Surprised by Suffering offers biblical counsel and comfort for those undergoing suffering and for those who minister to the suffering, counsel that can help believers stand in times of trial with faith in a God who is both loving and good.

33 I have said these things to you, that in me you may have peace. In the world you will have tribulation. But take heart; I have overcome the world.” (John 16:33 ESV)

The natural man in each of us wants to paint God as a combination of a spiritual Santa Clause and the Genie from Aladdin’s Lamp or at least a lesser deity whose will is subject to his. We tie our good works into how well our lives go. If we do good things then God will surely see to it that we don’t lose our jobs or we get a great raise each year or our health is good. Some even demand this and hold God accountable if He “does not come through.” Equity or fairness is our cry. Just look at our society. Even though it isn’t a reality everyone seems to demand… 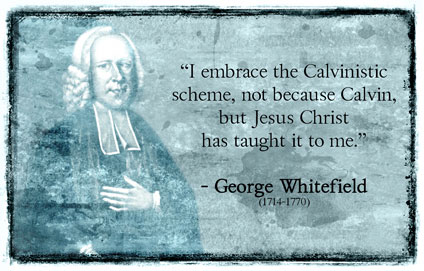 I would as soon go to yonder church-yard, and attempt to raise the dead carcasses, with a “come forth,” as to preach to dead souls, did I not hope for some superior power to make the word effectual to the designed end. I should only be like a sounding brass for any saving purpose, or as a tinkling cymbal. Neither is this change to be wrought by the power of our own free-will. This is an idol everywhere set up, but we dare not fall down and worship it. “No man (says Christ) can come to me, unless the Father draw him.” Our own free-will, if improved, may restrain us from the commission of many evils, and put us in the way of conversion; but, after exerting our utmost efforts (and we are bound in duty to exert them) we shall find the words of our own church…