Yep, it’s that time again for a scary post! 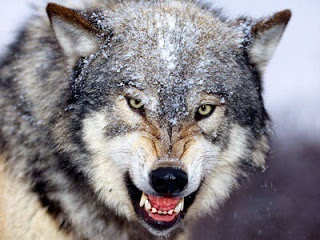 Talk about leading children astray!!  This is the spiritual danger from heretics like Rodney Howard-Browne.  (And this doesn’t even consider that she’s a young woman “preaching” and “teaching” to the entire congregation of people — who are just as deceived — when Paul clearly says this is forbidden to women.)
This is an example of what happens to people who abuse God’s Word to make a mega-church (with an assistant leader as a woman) with a cult of personality. Glyn Barrett demonstrates why he is totally disqualified as a church leader.
The Andy Stanley Cornucopia of false teachings includes sooooo many links to items demonstrating why he should be disqualified from church leadership!
More examples of the horrible teachings and abuses of Scripture by Bill Gothard.
An interesting article about the Hutterite sect.  I hadn’t studied the Hutterites (although I have heard of them) so I did a wee bit of “Googling” to get some information and found this National Geographic article.  I see a lot of similarities between them and the Amish and Mennonites, especially with some legalistic practices.  Apparently there was a television program by National Geographic which didn’t set well with some of the Hutterites.  Of course this is common when cultic groups are examined.  Wikipedia has a pretty good article about the history of this sect.
Joyce Meyer’s jokes at Steven Furtick’s “revival.”  An excellent example as to why her teachings should be avoided at all costs.
Doug Evans has an excellent examination of false teacher Steven Furtick.
If your “church” does this, leave it and find a God-honoring assembly.  Concert performances are not worship services.
What Is Heresy?
Excellent sermon examining false prophets/teachers, including Beth Moore.
Is John Piper disqualifying himself as a pastor?
Several years back the Emergent movement came up with what became known as “The New Perspective on Paul,” which is nothing but more heretical theology.  I came across articles on the subject by Gary Gilley, which were in my file, and decided it was something which should be made available for as many people as possible so everyone can avoid this false teaching.  It’s a three part series:  part 1, part 2, and part 3.
Refuting Word of Faith teachings.
I was probably one of the original haters!