While some pundits are declaring the Clinton political dynasty dead, sources tell us that it is far from over. Chelsea Clinton is being groomed for the New York seat held by Rep. Nita Lowey.

Chelsea Clinton could run for the seat in NYC’s 17th Congressional District once Lowey, a respected, 79-year-old career politician with nearly 30 years in office, decides to retire, we have exclusively learned.

If you thought for one, fleeting second that the Clinton’s would just somehow after Crooked Hillary’s rejection by the American people, think again. There are many more billions to be made, and many more state favors to sell and trade. So the baton gets passed to Chelsea. Congresswoman Chelsea Clinton. Thanks for the Congressional seat, mom and dad!

In August, Hillary and Bill Clinton purchased a home next door to their primary residence in Chappaqua for $1.16 million, which is intended for Chelsea, her husband, Marc Mezvinsky, and their two children, Charlotte and Aidan.

While Chelsea currently lives, and is registered to vote, in Manhattan, she could easily make Chappaqua her legal residence in order to run for Lowey’s seat when it becomes vacant.

A source told us, “While it is true the Clintons need some time to regroup after Hillary’s crushing loss, they will not give up. Chelsea would be the next extension of the Clinton brand. In the past few years, she has taken a very visible role in the Clinton Foundation and on the campaign trail. While politics isn’t the life Hillary wanted for Chelsea, she chose to go on the campaign trail for her mother and has turned out to be very poised, articulate and comfortable with the visibility.”

The source continued, “There has been a lot of speculation within New York Democratic circles about Lowey’s retirement and Chelsea running for the seat. There is a belief that Chappaqua is a logical place for Chelsea to run, because it would be straightforward for her to raise money and build a powerful base.”

A spokesperson for Lowey — who is serving her 14th term in Congress and was first elected to the House of Representatives in 1988 — declined to comment. A spokesperson for Chelsea didn’t get back to us. source 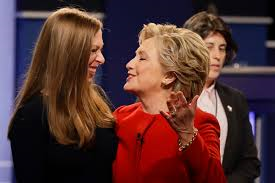 Chelsea Clinton being groomed to run for Congress

Chelsea could run for the seat in NYC’s 17th Congressional District once Lowey, a respected, 79-year-old career politician with nearly 30 years in office, decides to retire, we have exclusively learned.

In August, Hillary and Bill Clinton purchased a home next door to their primary residence in Chappaqua for $1.16 million, which is intended for Chelsea, her husband, Marc Mezvinsky, and their two children, Charlotte and Aidan.

While Chelsea currently lives, and is registered to vote, in Manhattan, she could easily make Chappaqua her legal residence in order to run for Lowey’s seat when it becomes vacant.

The publisher of The New York Times penned a letter to readers Friday promising that the paper would “reflect” on its coverage of this year’s election while rededicating itself to reporting on “America and the world” honestly.

EDITOR’S NOTE: After getting their head handed to them by Donald Trump, the corrupt liberal media has come to a cold, hard, financially-motivated reality, and that is this. They have realized they can no longer continue to lie to to the American people, and that the crap they peddle will no longer be accepted. There is great satisfaction in watching them now, with their cover blown, squirming like the weasels they truly are. Thank you, president-elect Trump.

“We cannot deliver the independent, original journalism for which we are known without the loyalty of our subscribers,” the letter states.

New York Post columnist and former Times reporter Michael Goodwin wrote, “because it the New York Times demonized Trump from start to finish, it failed to realize he was onto something. And because the paper decided that Trump’s supporters were a rabble of racist rednecks and homophobes, it didn’t have a clue about what was happening in the lives of the Americans who elected the new president.

Sulzbergers letter was released after the paper’s public editor, Liz Spayd, took the paper to task for its election coverage. She pointed out how its polling feature Upshot gave Hillary Clinton an 84 percent chance as voters went to the polls.

She compared stories that the paper ran about President-elect Donald Trump and Clinton, where the paper made Clinton look functional and organized and the Trump discombobulated.

Spayd wrote, “Readers are sending letters of complaint at a rapid rate. Here’s one that summed up the feelings succinctly, from Kathleen Casey of Houston: “Now, that the world has been upended and you are all, to a person, in a state of surprise and shock, you may want to consider whether you should change your focus from telling the reader what and how to think, and instead devote yourselves to finding out what the reader (and non-readers) actually think.”

The NYT would do well to plant some roots in Red America https://t.co/HDd4SFJqtq

She wrote about another reader who asked that the paper should focus on the electorate instead of “pushing the limited agenda of your editors.”

“Please come down from your New York City skyscraper and join the rest of us.”

Sulzberger—who insisted that the paper covered both candidates fairly– also sent a note to staffers on Friday reminding the newsroom to “give the news impartially, without fear or favor.”

“But we also approach the incoming Trump administration without bias,” he said. source

Days after Donald Trump stunned the world by winning the presidency, liberal America remains in the throes of a massive mental and emotional meltdown.

Anyone expressing support for Trump has become the target of unrestrained venom: There are calls to boycott New Balance — its sneakers have been publicly burned — because an official said Trump would be better on trade issues.

Meanwhile, the CEO of Grubhub, the online food-delivery service, demanded that employees who agree with Trump resign, because “you have no place here.” (He had to retreat: His lawyers read him the First Amendment and noted that political discrimination also violates California law.)

This is just vicious stuff. But for pure pathos crossing into the absurd, we turn (as usual) to the college campus. Consider:

While the infantile left is throwing a major dummy spit in the US, complete with rioting on the streets because of democratic elections in action, we have the same thing going on in Australia. With the Trump win the cry-babies of the left are out in force, showing us that they care nothing for elections and democracy.

The exact same thing can be said of the Australian left. They too hate elections and democracy. By refusing to let the Australian people decide on the marriage debate with a plebiscite, these militants demonstrate how completely opposed they are to things like freedom and a decent public debate.

Of course all this is done in the name of tolerance, diversity and acceptance. Yeah right. Homosexuals as individuals have every right that others have, yet they keep demanding more and more. They are never satisfied. This shows you how useless policies of appeasement are.

You can never please the militants, so seeking to placate them does no good at all. The more you give in to them, the more they will demand of you. Consider the latest outrageous example of this. Our Prime Minister has just been told that he is banned from marching in the next Sydney Gay and Lesbian Mardi Gras.

Even though he has marched with them in previous years, he is now being given the cold shoulder because he is still running with his promise to put the issue of homosexual marriage in the hands of the people, via the plebiscite. Labor and the Greens have of course shot this down, so now we have no forward motion on the issue.

Either folks will have to wait until the next federal election to see if Labor can get back in, or they will have yet more private members’ bills introduced on this, even though we already have had around 18 such bills, all of which have been defeated.

So Malcolm Turnbull is sticking to his promise on the plebiscite, Labor and the Greens have blocked it in the Senate, and now the angry militants are throwing another hissy fit, just like their colleagues in America. Consider one news item from today’s press on this story:

Malcolm Turnbull will be banned from attending Sydney’s Gay and Lesbian Mardi Gras as an official guest as a protest against his push for national plebiscite on same sex marriage. The Prime Minister will be informed that he’s off the invitation list after an activist takeover of the Mardi Gras at today’s annual general meeting demanded the organisation issue a statement.
But the PM can still turn up at the world famous celebration of gay pride and mingle in the streets, which is held each year in his electorate. Last year Mr Turnbull became the first sitting Prime Minister to attend the Mardi Gras, defying a backlash on the Liberal backbench.
But a meeting of the Mardi Gras has resolved to take him off the invitation list over the plebiscite, which gay activists oppose because they fear it will fuel hate speech and the debate over Safe Schools programs discussing sexuality. The motion states that “the Annual General Meeting of Sydney Gay and Lesbian Mardi Gras does not believe that a Prime Minister who denies us equality should be welcome as an official guest at our parade.”

This is so bizarre and outrageous for so many reasons. Um earth calling militants: Turnbull is of course pro-homosexuality and pro-homosexual marriage. He simply said it should be up to the will of the people to decide this. Hmm, that makes perfect sense to me given that the last time I checked, Australia was a democracy.

But the activists want nothing of it. They know full well that if the people were actually allowed to have their say on this, traditional marriage would be affirmed and this revolutionary assault on marriage would be rejected. Thus they demand that Parliament deal with it instead of the people.

Despite the 18 or so consecutive losses on this, they know how effective a war of attrition can be. Just keep hammering away, and keep introducing one homosexual marriage bill after another, and eventually you will wear down enough politicians to see it finally passed.

That is classic left-wing tactics: bypass the people and engage in guerrilla warfare in the political arena. Works all the time. But whatever you do, do not let the people decide. That is always dangerous. The recent Brexit vote and the more recent Trump vote are clear examples of this.

So poor Malcolm cannot go this year – at least in any sort of official capacity. Of course Turnbull should never have gone there in the first place! It was ridiculous and scandalous for a sitting Prime Minister to attend and affirm and condone this march of sleaze and lasciviousness.

But as a lifelong lefty on such matters, what do we expect? So I am glad he has been rebuffed in this fashion. As I say, you can never satisfy the demands of the left. They are insatiable. The more the activists get, the more they will demand. That is why we should never opt for appeasement.

It is as Churchill warned: “An appeaser is one who feeds a crocodile, hoping it will eat him last.” Turnbull has engaged in far too much naïve and unhelpful appeasement. It is time he started acting like a Liberal leader, not like a stooge for Labor and the Greens.

The post You Can Never Satisfy the Leftist Militants appeared first on CultureWatch.