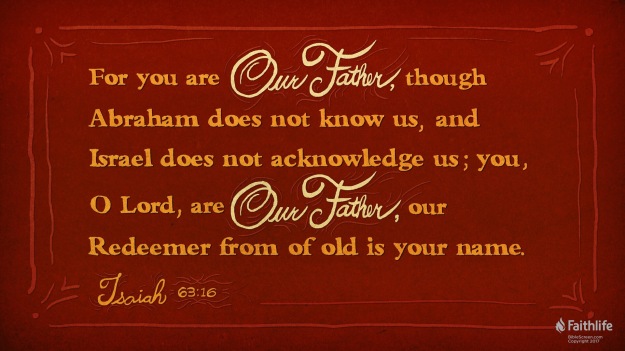 Yahweh has claimed to be their Father (e.g., 1:2; 9:6 again; 43:6) and their go’el (e.g., 41:14; 43:14; 60:16). The prophet asks that Yahweh now behave like one. Abraham was the people’s father (41:8; 51:2), as was Jacob-Israel (45:25; 58:14). They bore this family name (44:5; 48:1). But far from the Israelites’ being acknowledged among the nations (61:9), even the progenitors do not acknowledge this people. Abraham and Israel do not treat this people as their descendants and therefore pass on to them the privileges of being their children. Their earthly fathers have cut them off. That makes it the more pressing that Yahweh indeed treat them as father. It is perhaps this consideration that makes the prophet abandon for a moment the usual ot restraint over calling Yahweh “Father.”[1]

16 “For you are our father” picks up the theme of the sermon from v 8, which has God speak of ancient Israel as his “children.” The anguished cry wants to claim that the relation to ancient Israel should apply to them also across all the intervening centuries. It is the cry of one who represents a group not normally identified with the traditional Israel of twelve tribes, as the following qualifying clauses show. The appelation אבינו, “our father,” for God is rare in the ot, appearing only here (twice) and in 64:7. The notion of YHWH as Israel’s father appears also in Deut 32:6, Jer 31:9, and Mal 1:6 and 2:10. Isaiah refers to Israelites as disobedient sons (1:2, 4; 30:1, 9) and also as children of Zion (43:6; 49:22; 60:4). In addition, the metaphor of Zion as the bride or wife of YHWH (49:14, 18; 54:5; 61:10; 62:5) rounds out the repertoire of Isaiah’s family images for God (see Goldenstein, Gebet der Gottesknechte, 244).

“Abraham did not know us” confesses that they cannot claim to be descended from Abraham. Who, in Jerusalem of the fifth century b.c.e., could this be? Is it one of “the people of the land,” persons brought to occupy sections of northern Israel under the empires (2 Kgs 17:24–28) who learned to worship at YHWH sanctuaries (cf. Zech 7:1–3)? The Zadokite priests would also fit into this classification, but not into the one that follows. “Israel does not recognize us” complains of a current disenfranchisement. This points to the people of the land (see Zech 7:4–14; Ezra 4:1–3) who Ezra and Nehemiah also excluded from cooperation or marriage with Israelites. The verse shows the diversity of persons seeking to work and worship in Jerusalem at this time. The Vision calls for openness toward them. Other leaders suspected them and refused cooperation.

A group of direct descendants of Israel from the exodus on claims YHWH as their “redeemer, from that age.” They want God to recognize that he is their “father,” perhaps implying that he is only theirs.[2]

63:16 Abraham … Israel. The nation’s physical ancestors, Abraham and Jacob (Israel) played a crucial role in Jewish thinking. It had been the besetting temptation and sin of the Jews to rest on the mere privilege of descent from Abraham and Jacob (cf. Mt 3:9; Jn 4:12; 8:39), but at last they renounce that to trust God alone as Father.[3]

63:16 Abraham does not know us Abraham would not recognize his own descendants because of how far off the path they’ve wandered from following Yahweh (see Gen 15:6 on Abraham’s faith).[4]

63:16 The people of Israel are the Lord’s children (v. 8). He is their Father because He created them as a nation (Deut. 32:6; Jer. 3:4, 19). It is rare in the pages of the Hebrew Bible to find the explicit statement of the Fatherhood of God, though it is often presented implicitly. Abraham and Israel, the people’s human fathers (51:2), were limited in their knowledge by time and space—in contrast to the Lord, the people’s Father and Redeemer from Everlasting (41:14).[6]