It’s difficult to take rebuke, especially when it’s unsolicited. We feel exposed and embarrassed when our sin is brought to light. And if we don’t have the humility to accept rebuke, the experience can leave us at odds with the brave soul who assumes the task.

For Paul, who rebuked the Corinthians, news of their love was a relief and comfort to him: “But God, who comforts the humble, comforted us by the coming of Titus, and not only by his coming, but also by the comfort with which he was comforted among you, because he reported to us your longing, your mourning, your zeal for me, so that I rejoiced even more” (2 Cor 7:6–7).

We form community when others challenge us and encourage us to live for God. While community can fulfill our social needs, it’s this common purpose that draws us together. When we take rebuke graciously and seek forgiveness from God, it forges the bond of community. When we rebel, or when we’re sensitive and prideful, it creates a rift. Because the Corinthians felt sorrow for their sin and expressed concern for Paul, it solidified their relationship. And it comforted him and brought him incredible joy during conflict and trial.

Surprisingly, the rebuked person often has to be intentional about extending love and comfort to the one who brings the rebuke. Paul tells the Corinthians to “make room for us in your hearts” (2 Cor 7:2). We should do the same for those in our community. Not all people possess Paul’s zeal and boldness, so we should prepare ourselves to graciously accept correction when it comes—solicited or not. Reaching out to those around us and letting them know we appreciate their rebuke will help build up a community that is authentically following Jesus.

Do others approach you about your sin? If you haven’t been rebuked recently, how can you make yourself more approachable?

16 The Spirit Himself testifies with our spirit that we are children of God, 17 and if children, heirs also, heirs of God and fellow heirs with Christ, if indeed we suffer with Him so that we may also be glorified with Him. Romans 8:16-17 (NASB)

Even through as Christians we are justified and are under no condemnation (Romans 8:1) it is also clearly taught in God’s Word that Christians are to live lives of repentance from the works of the flesh. However, there are some who take the Doctrines of Grace and separate them from the great teachings of the Puritans such as John Owen, John Bunyan, Thomas Watson, Jonathan Edwards, et cetera that made it clear that in this life Christians are required to “work out their salvation with fear and trembling” (Philippians 2:12). Those who are doing this are antinomians in that they teach those…

“Blessed are the merciful, for they shall receive mercy” (Matt. 5:7).

Mercy is compassion in action.

Mercy is not a human attribute. It is God’s gift to those who seek Him. Psalm 103:11 says, “As the heaven is high above the earth, so great is his mercy toward them that fear him” (kjv).

The verb form of “merciful” appears many times in Scripture and means “to have mercy on,” “to aid the afflicted,” “to give help to the wretched,” or “to rescue the miserable.” In general it refers to anything you do to benefit someone in need. The adjective form is used only twice—here in Matthew 5:7 and in Hebrews 2:17, which reads, “[Christ] had to be made like His brethren in all things, that He might become a merciful and faithful high priest.” Christ Himself is both the source and illustration of mercy.

Christ modeled mercy throughout His earthly ministry. He healed the sick and enabled the crippled to walk. He gave sight to the blind, hearing to the deaf, and speech to the mute. His redeeming love embraced sinners of all kinds. He wept with those in sorrow and comforted the lonely. He embraced little children and the elderly alike. His mercy was compassion in action!

Despite His abundant mercy, Jesus received no mercy from His enemies. They hated Him without cause, accused Him falsely, beat Him, nailed Him to a cross, spat upon Him, and cursed Him. Even then He sought mercy for them, praying, “Father, forgive them; for they do not know what they are doing” (Luke 23:34).

Some have paraphrased Matthew 5:7 to say that if you show mercy to others, they will show mercy to you. Now, that might happen in some isolated incidences, but in this jaded world that’s not often the case—as Jesus’ life clearly demonstrates. Many Christians have incurred slander, rebuke, lawsuits, and even death for their noble efforts. Jesus didn’t guarantee merciful treatment from others. His emphasis was that God shows mercy toward those who show mercy to others.

Don’t ever be reluctant to show mercy to others—even when they misunderstand or mistreat you. God will use your kindness for His glory and will reward you accordingly.

Suggestions for Prayer:  Praise Jesus for being willing to suffer death that you might receive mercy. ✧ Is there someone you might show mercy to today in some tangible way?

For Further Study: Read John 5:1–18. ✧ How did Christ demonstrate mercy to the sick man? ✧ How did the Jewish religious leaders react?[1]

(Thomas D. Williams – Breitbart) Catholic church attendance in the United States fell by six percent between the pontificates of Pope Benedict XVI and Pope Francis, the sharpest drop in decades, a new Gallup poll has revealed.

An average of 39 percent of U.S. Catholics attended church weekly during the heart of the Francis papacy, from 2014 to 2017, Gallup found in a survey released April 9, which represents a significant drop from the 45 percent of Catholics who attended weekly Mass from 2005 to 2008, in the early years of the Benedict pontificate. View article →

Why the left has been consistently wrong and produced so much destruction in its wake. 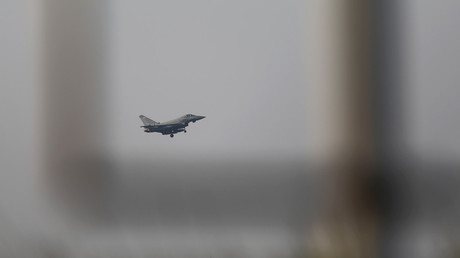 The majority of rockets fired in Syria by the UK, US, and France were intercepted by Syrian air defense systems, the Russian Defense Ministry said. Russian air defense units were not involved in repelling the attack.
Read Full Article at RT.com

I know thy works, that thou art neither cold nor hot.

God will speak to us if we read and study and obey the Word of God! But when He does speak, we should speak back to Him in prayer and devotion. Otherwise, we are among the Christians who are mired down right where we are.

Many in our congregations have grown older and yet are not one inch farther up the mountain than on that day when the sun first arose on them in conversion. In fact, some are not even as far advanced along the way with God as they were a few years ago.

If these things are true, I can only conclude that there are “common” Christians, men and women who no longer hear the Lord speaking to them as they should.

Can they really think that this halfway Christian life is the best that we can know?

In the face of what Christ offers us, how can we settle for so little?

It is a tragedy of our time that so many are settling for less than the Lord is willing to give!

Dear Lord, sometimes my spiritual life seems like a world-class roller-coaster ride! I want to keep growing in my relationship with You, Lord.[1]

Francis Schaeffer believes that the church has a heavy responsibility to promote community.  He holds that the first step in comprehending Christian community is understanding the individuals who make up the community.  The reason: The individual is important to God.  He adds, “I am convinced that in the twentieth century people all over the world will not listen if we have the right doctrine, the right polity, but are not exhibiting community” (The Church At The End Of The Twentieth Century, 64).

He stresses “existential living in the community.”  The horizontal relationships must all be rooted in the vertical, namely, a relationship with God.  He holds that the primary responsibility is developing community within the church.  He does not minimize the importance of reaching out to the lost but contends the community of the faithful must come first.

We Must Practice Purity

Schaeffer expresses his passion for maintaining…

Francis Schaeffer has an extremely high view of the church and great expectations as any Christian should.  He details some solemn responsibilities that the church of Jesus Christ must consider.

Schaeffer’s primary assertion is that Scripture mandates eight specific norms for the New Testament church (The Church At The End Of The Twentieth Century, 51-60).  The first norm: Local congregations are to exist and should be made up of Christians.   Schaeffer would have clearly opposed the so-called seeker sensitive movement that is so prevalent in the church today.  While he believed that the church ought to evangelize the lost, he would have had real problems with the present day fascination of catering to the non-believer.

Second, Dr. Schaeffer believed these congregations ought to meet in a special way on the first day of the week.  He…

The Church in Modern Culture

Francis Schaeffer’s view of the church in modern culture is multifaceted yet cuts straight to the point.  He does not mince words or play clever evangelical games.  He believes one major problem with Christians is that they see things in bits and pieces.  They have failed to see that modern man’s despair has come to fruition because of a shift in worldview.  He contends that Christians should begin to think in terms of the big picture.  They should have a view of spiritual reality that is authentic and covers all areas of life.  Indeed, the Lordship of Christ covers all life and all life equally.

The Church in Postmodern Culture: Marks of Postmodernism

It is interesting to note that Dr. Schaeffer may have been the first to write in-depth about post-Christian culture.  It is important to understand Schaeffer’s view on culture in order to understand…