1 Samuel 10:1–11:15; James 2:14–18; Psalm 119:65–80We often wonder whether God hears our prayers. Even when we acknowledge that God deals with each petition we send His way, we experience doubt because we don’t understand how He has handled our plea. Yet instead of asking “Is God hearing me?” we should be asking God to help us grow closer to Him and gain a better understanding of His ways. We should echo the words of the psalmist, “You have dealt well with your servant, O Yahweh, according to your word. Teach me good discernment and knowledge, for I believe your commands” (Psa 119:65–66).We often misunderstand the concepts of discernment and knowledge. Discernment allows us to know God’s will and perceive the decisions He would have us make. Knowledge helps us to understand God Himself, primarily His character. Both of these concepts are grounded in our relationship with God and others, both empower us to work for Him—and we are called to cultivate both qualities in our lives.Unless we know God, we’re incapable of successfully doing His work. We must be willing to talk to God honestly about our relationships, as the psalmist does in Psalm 119:69–72. The psalmist acknowledges that he needs God’s help in all matters of his relationship with God and all matters of his relationship with others. He understands that he cannot even begin to know God without the power of God helping him.We must be empowered for action, both in the intimacy of prayer and in the reality of relationships. And we must support what we believe with our works, as the letter of James call us to do: “For just as the body without the spirit is dead, so also faith without works is dead” (Jas 2:14–26).Reflecting regularly on how God has worked with us and is working in us allows us to recognize that everything in our lives has a purpose. God often works in others through us, and that great calling requires us to have knowledge of Him and discernment about His workings in our world.How are you discerning the great work of God in your life? How are you enhancing your knowledge of God?John D. Barry[1]

•The best of Wretched Radio
•Harmonizing contradictions in the Bible through Christ
•Are we accountable for sins in our dreams?
•Showing how Ruth applies to your life today
•Don’t make excuses for skipping church

“You also, as living stones, are being built up as a spiritual house” (1 Peter 2:5).✧✧✧Christ is your life, and you are an integral part of what He is accomplishing in the world.The Jewish culture of Peter’s time centered on the Temple in Jerusalem. Apparently drawing from that picture, Peter used vivid language to teach that God no longer dwells in an earthly, material, temporal house but in a spiritual house. Christ is the cornerstone, and the spiritual house He is building is comprised of individual believers.That analogy introduces us to the first spiritual privilege Christians enjoy: union with Christ Himself. That makes Christianity utterly unique among religions. Buddhists are not said to be in Buddha; Muslims are not in Muhammad, or even in Allah; a Confucian is not in Confucius. Only Christians are united with and receive their spiritual life from the object of their worship.When you came to Christ, the living stone, you became a living stone yourself. You possess His resurrection life and draw from His spiritual resources. That’s what Peter meant when he said that God “has granted to us His precious and magnificent promises, in order that by them you might become partakers of the divine nature” (2 Peter 1:4).Ephesians 2:19–22 adds, “You are no longer strangers and aliens, but you are fellow citizens with the saints, and are of God’s household, having been built upon the foundation of the apostles and prophets, Christ Jesus Himself being the cornerstone, in whom the whole building, being fitted together is growing into a holy temple in the Lord; in whom you also are being built together into a dwelling of God in the Spirit.” Christ is the cornerstone of the church, built on the foundation of Biblical truth, which is the divine revelation given through the apostles and prophets. Rejoice in the privilege of being united with Christ and learning from His Word!✧✧✧Suggestions for Prayer:  Thank God for selecting you as one of His spiritual stones. Seek His wisdom and grace in living each day to His glory.For Further Study: Read Acts 17:24, 1 Timothy 3:15, and Hebrews 3:6, noting what they teach about God’s spiritual house.[1]

The state of Kentucky just defied those who want every remnant of the Christian faith to be removed from public schools. In a ceremony last week, Kentucky Governor Matt Bevin signed a bill that allows public schools in the state to teach the Bible, WDBP reported. “The idea that we would not want this to… The post Kentucky Defies Leftists & Atheists, Brings the Bible Back to Schools appeared first on Conservative Tribune . 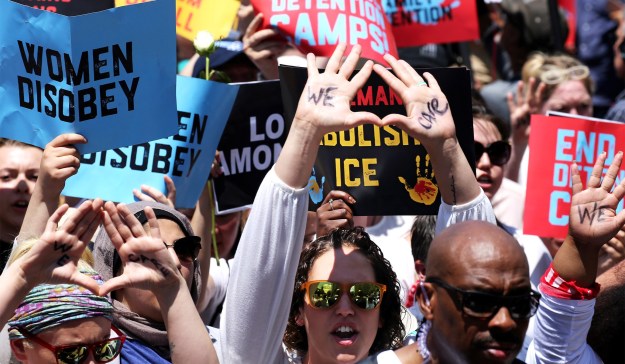 There’s no better explanation for the current progressive meltdown.

Source: The Left Can’t Come to Grips with Loss of Power