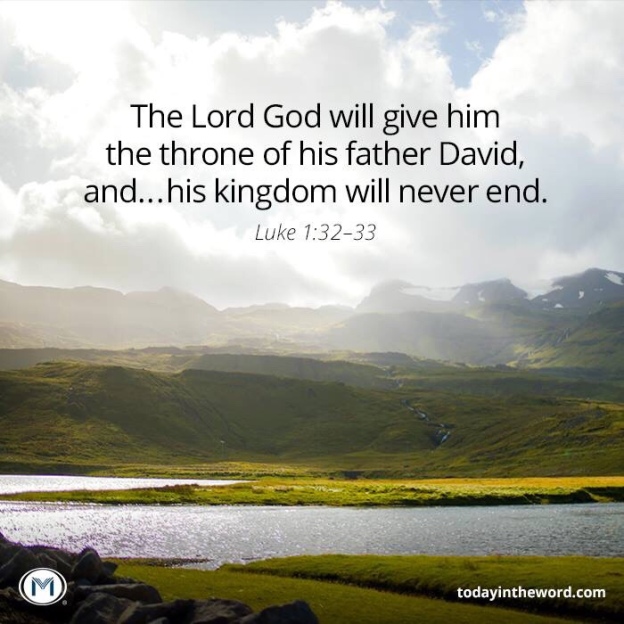 “And behold, you will conceive in your womb and bear a son, and you shall name Him Jesus. He will be great and will be called the Son of the Most High; and the Lord God will give Him the throne of His father David; and He will reign over the house of Jacob forever, and His kingdom will have no end.” (1:31–33)

After Gabriel’s greeting, Mary for the first time heard what the gracious work of God in her life was going to be. If his greeting had perplexed her, she must have been dumfounded at what he said next. Mary knew of only one way that she could conceive a son—through sexual relations with a man. She also knew that she had not had such relations, as her question in verse 34, “How can this be, since I am a virgin?” indicates. The concept of a pregnant virgin was utterly inconceivable to her; an impossibility, a contradiction in terms like a married bachelor, or a square circle.

Nevertheless Gabriel’s stunning announcement, in words fulfilling Isaiah’s prophecy of Messiah’s virgin birth (Isa. 7:14; cf. Matt. 1:23), was that Mary without the seed from a man would conceive in [her] womb and bear a son. That staggering promise of a divine miracle was far beyond her understanding or any human comprehension.

Gabriel then told Mary that her Son Jesus will be great (megas). Once again the understatement is striking. But all the synonyms that could be added, such as extraordinary, splendid, magnificent, noble, distinguished, powerful, or eminent, would be equally inadequate. It beggars human language to do justice to the majestic, glorious person of the Lord Jesus Christ. Adjectives and superlatives are not used because they are superfluous. His life will define great. And worshiping believers are always aware that language is inadequate to express the honor and glory of His person.

Unlike John the Baptist, whose greatness was qualified as being in God’s sight (1:15), Jesus’ greatness is unqualified. He is great in and of Himself; His greatness is intrinsic to His very nature as God, and is not derived from any source outside of Himself. Jesus Christ is “far above all rule and authority and power and dominion, and every name that is named, not only in this age but also in the one to come” (Eph. 1:21).

The true measure of Christ’s greatness may be seen in His sharing of God’s glory—of which God declared, “I will not give My glory to another” (Isa. 42:8). Referring to Isaiah’s vision of God’s majesty and glory (Isa. 6:1–10), the apostle John wrote, “These things Isaiah said because he saw His [Christ’s] glory, and he spoke of Him” (John 12:41). John could say that when Isaiah viewed God’s glory in the temple, he saw the glory of Christ, because He shares the Father’s glory. That glory, though veiled in His human flesh, was nonetheless manifested during Christ’s earthly life. John wrote, “The Word became flesh, and dwelt among us, and we saw His glory, glory as of the only begotten from the Father, full of grace and truth” (1:14). And for a brief moment on the Mount of Transfiguration, Jesus’ majestic glory was unveiled to Peter, James, and John (Matt. 17:1–8).

This amazing Child would be God incarnate, perfectly righteous in everything He thought, said, and did. He would die as a sinless sacrifice, providing Himself as a substitute for sinners, offering His atoning death to save them from their sins. But that is not the end of the story. He would not remain dead, but would rise to reign. The culmination of Christ’s work will come when the Lord God gives Him the throne of His father David; and He will reign over the house of Jacob forever, and His kingdom will have no end. As noted above, the Lord Jesus Christ was the rightful heir to the throne of His father David through His legal father, Joseph. Gabriel’s words emphasize both the Jewish character of Christ’s kingdom, since He will rule over the house of Jacob (Isa. 65:17–19; Zeph. 3:11–13; Zech. 14:16–21, as well as the rest of mankind; cf. Dan. 7:14, 27), and its eternality, since His kingdom will have no end (Rev. 11:15).

The promised kingdom is not limited to Christ’s present spiritual reign, as amillennialists advocate. The Bible teaches that Satan will be bound during the millennium (Rev. 20:1–3); yet now, as Peter warned, he “prowls around like a roaring lion, seeking someone to devour” (1 Peter 5:8). Therefore, the present age cannot be the millennium. Nor does the church usher in the millennial kingdom, at the end of which Christ returns, as postmillennialists postulate. Jesus Himself posed the rhetorical question, “When the Son of Man comes, will He find faith on the earth?” (Luke 18:8). (For a further discussion of millennial views, see Revelation 12–22, The MacArthur New Testament Commentary [Chicago: Moody, 2000], 228–33).

Jesus Christ rules spiritually in the heart of every believer (cf. Col. 1:13), and that spiritual rule will last forever because salvation is forever. But that does not preclude the future literal, earthly, millennial kingdom. During that blessed time, Jesus Christ, “the root and the descendant of David” (Rev. 22:16; cf. Isa. 11:1, 10; Matt. 1:1; Rom. 15:12), the Lion of the tribe of Judah (Rev. 5:5), will sit on His glorious throne, judging the nations with a rod of iron (Ps. 2:9; Rev. 12:5; 19:15) for a thousand years (Rev. 20:4–5). At the end of that time, God will uncreate the universe and create a new heaven and earth that will last for all eternity. The apostle Paul wrote,

Gabriel’s message to Mary introduces the pivotal point in redemptive history. How people respond to the Child of whom Gabriel spoke will determine their eternal destiny. As Simeon would later say to Mary, “Behold, this Child is appointed for the fall and rise of many in Israel” (Luke 2:34), and the rest of the world as well. And as the Child Himself would warn, “Unless you believe that I am He, you will die in your sins” (John 8:24), since “there is salvation in no one else; for there is no other name under heaven that has been given among men by which we must be saved” (Acts 4:12).[1]

32–33 Some scholars consider it significant that, whereas in v. 15 Gabriel had qualified his prophecy of the greatness of John (“he will be great in the sight of the Lord”), here his statement of the greatness of Mary’s Son has no qualification whatsoever. The striking term “Son of the Most High” (v. 32; cf. vv. 35, 76) leads to a clear messianic affirmation—the reference to the “throne of his father David.” Jesus’ divine sonship is thus linked to his messiahship in accord with 2 Samuel 7:12–14 and Psalm 2:7–9 (cf. Ps 89:26–29). The description of Jesus’ messianic destiny follows the statement of his sonship, and this sonship is related in v. 35 to his divine origin. Clearly Luke sees the messianic vocation as a function of God’s Son rather than seeing sonship as just an aspect of messiahship.

1:31–33. The angel’s message began with revealing the virgin birth and the name of the Child—you shall name Him Jesus (1:31). The transcendent significance of the Child was related: His person—He will be great (1:32a); His relation to God—He will be called the Son of the Most High (1:32b; a way of saying He is the “Son of God”), and His purpose—the Lord God (Yahweh of the OT) will give Him the throne of His father David (1:32c). This child will be the fulfillment of the Davidic covenant promises (1:33; cf. 2Sm 7) and the OT promises of the literal earthly kingdom for the nation of Israel (see also the comments on Mt 3:1–4).[4]

1:31–33 Notice the important truths which are enshrined in the annunciation:

The real humanity of the Messiah—you will conceive in your womb and bring forth a Son.

His deity and His mission as Savior—and shall call His name JESUS (meaning Jehovah is the Savior).

His essential greatness—He will be great, both as to His Person and His work.

His identity as the Son of God—and will be called the Son of the Highest.

His everlasting and universal kingdom—He will reign over the house of Jacob forever, and of His kingdom there will be no end.

Verses 31 and 32a obviously refer to Christ’s First Advent, whereas verses 32b and 33 describe His Second Coming as King of kings and Lord of lords.[6]