Former Congressman Ron Paul has come out swinging against neoconservative voices in President Trump’s cabinet. John Bolton and Mike Pompeo, he said, should be punished for insubordination.

President Trump’s announcement last month that he would withdraw all US forces from Syria and the news that he was mulling a partial pullout from Afghanistan seemed to be the fulfilment of an often-repeated campaign promise. “I don’t want to be in Syria forever,” Trump said in December. “It’s sand and death.” 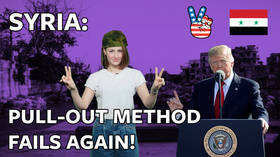 Nevertheless, war enthusiasts in both parties and their cheerleaders in the media reacted with shock. Florida Senator Marco Rubio, known in DC as a foreign policy hawk, called the pull-out a “colossal” mistake and a “grave error that’s going to have significant repercussions in the years and months to come.”

However, Trump found resistance coming from within his own cabinet too. First, National Security Advisor John Bolton walked back the initial 60-100 day timeline for the Syria withdrawal. Bolton noted that the withdrawal would only occur after the US had drawn up a contingency plan with its allies in the region to protect Kurdish fighters in Syria from Turkish forces, and to contain Iranian influence in the war-stricken country.

Then, Secretary of State Mike Pompeo took off on a whirlwind trip to the Middle East in the new year, assuring allies that the US would remain open to intervention in Syria, and would maintain a “liberating” presence in the region: business as usual.

“When America retreats, chaos follows,” Pompeo said, in a swaggering, cocksure speech in Cairo on Thursday. “America will not retreat until the terror fight is over.”

“I think what Pompeo and Bolton did was insubordinate,” Ron Paul told RT’s Rick Sanchez later that day. “And I don’t know why Trump puts up with it.”

Trump, he continued, “stakes out, politically, a risky position by boldly saying ‘we should come home.’” Paul, a consistent opponent to foreign wars and interventionism, then blasted Trump for backing down to the likes of Bolton and Pompeo.

“These people who really run the show, they come down very hard on him and then he backs down. But if he were to ask me ‘what should I do with this Bolton guy?,’ I would say ‘just fire him, he’s not helping you in any way!'”

Paul also criticized Trump for calling on the Pentagon to keep its watchdog reports secret. In a cabinet meeting last week, Trump criticized the Department of Defense for releasing a report detailing money wasted in the reconstruction efforts in Afghanistan, and territorial losses by the Afghan government.

While Trump called the release of the report “insane” and an aid to America’s enemies, Paul said it proves the United States should not be in Afghanistan in the first place.

“No matter what kind of a crowd I talk to… the solution is following the rules,” he said. “It’s only the people, through their members of Congress, who decide when you get involved in war, and that’s totally ignored, and it’s ignored by both parties.”