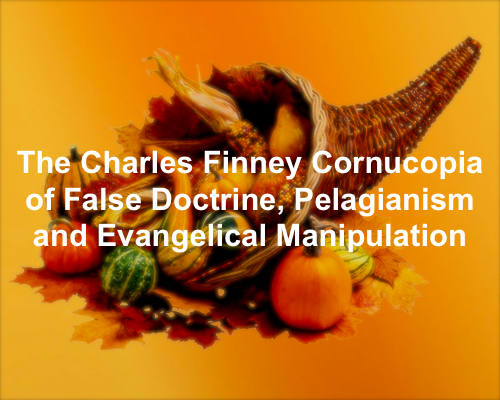 Charles G. Finney (1792-1875) was the father of “Revivalism” in America, the most prominent preacher of the Second Great Awakening, and in many ways the father of modern Evangelicalism in America. He is often considered the predecessor of American Evangelists/Revivalists like D.L. Moody, Billy Sunday and Billy Graham. He was a successful lawyer who became a Christian as a young man and decided to use his considerable powers of persuasion to begin preaching, in spite of having little theological training.

If you’ve ever heard a preacher give an impassioned, emotionally manipulative sermon that ends with an irresistible plea to come forward and somehow make a decision to become a Christian, you’ve witnessed the lasting impact of Charles Finney. If you’ve ever felt that the church was ineffective in building God’s Kingdom and what we really need is a big ‘ole revival, you’ve been influenced by Finney.

In overly simplistic terms, Finney was guilty of a form of “Pelagianism,” which means he over-emphasized man’s free will so much that the sovereignty of God (and God’s ability to save) was virtually ignored. Finney believed that Christians could accomplish God’s work by simply using their determination, so much so in fact, that he practically left God out of the equation:

“A revival is not a miracle according to another definition of the term “miracle” — something above the powers of nature. There is nothing in religion beyond the ordinary powers of nature. It consists entirely in the right exercise of the powers of nature. It is just that, and nothing else. When mankind become religious, they are not enabled to put forth exertions which they were unable before to put forth. They only exert powers which they had before, in a different way, and use them for the glory of God. A revival is not a miracle, nor dependent on a miracle, in any sense. It is a purely philosophical result of the right use of the constituted means — as much so as any other effect produced by the application of means.” -Charles Finney, (Lectures on Revival, Lecture 1, 11)

Worse than that, was Finney’s unorthodox view of the atonement of Christ. Finney didn’t believe in the substitutionary atonement, instead he believed that Christ’s death on the cross was simply demonstrating obedience to God. Since Jesus was obedient enough to go all the way to death on the cross, we should do likewise. Christ didn’t so much accomplish something on the cross (pay for our sins) as He was setting a good example for us to follow. This alters the meaning of the Gospel completely! This view of the atonement is usually called the “Moral Influence” theory. Not only did Finney believe that the “moral influence” theory of the atonement was the chief way of understanding the cross; he explicitly denied the substitutionary atonement, which he said:

If you’ve ever felt worn out and frustrated by the “do more, try harder” version of Christianity, this shocking news about Finney’s beliefs might help you to understand what has gone wrong in much of American Evangelicalism.

The following articles and videos are from various writers, theologians and pastors who all agree that Charles G. Finney had a number of very questionable beliefs, and it would do the church much good to carefully consider how Finney’s ideas contrast with Holy Scripture.

The Disturbing Legacy of Charles Finney by Michael Horton

Charles G. Finney: Heretic or Man of God (Part one) by Richard Belcher

A Wolf In Sheep’s Clothing: How Charles Finney’s Theology Ravaged the Evangelical Movement by Phil Johnson

The Heresies of Charles Finney (Part one) by John Cereghin

-This article by Steven Kozar
— Read on www.piratechristian.com/messedupchurch/2016/10/the-charles-finney-cornucopia-of-false-teaching-emotional-manipulation-evangelical-influence-k7r6n