Authored by Lance Roberts via RealInvestmentAdvice.com,

Last week, we discussed the continuation of the rally from the December 24th lows. 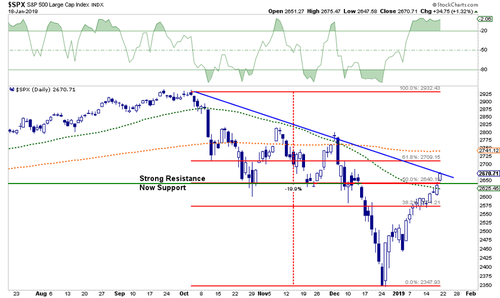 “Importantly, the previous deep ‘oversold’ condition which was supportive of the rally following Christmas Eve has now been fully reversed back into extreme ‘overbought’ territory. While this doesn’t mean the current rally will immediately reverse, it does suggest that upside from current levels is likely limited.”

As I discussed previously, what was needed for the bulls to gain control of the narrative were several important issues:

Those issues were fulfilled with headlines from this past week (click a headline to read the article):

Between a more dovish Federal Reserve, “hopeful” headlines from Washington D.C. and a “S*** Ton” of liquidity, it was not surprising to see stocks hit our first level of major overhead resistance at 2670 as shown in the first chart above.

Of course, the question now is what happens next?

“Over the next couple of weeks, the market is going to face the ‘test’ that has defined the ‘bear markets’ of the past.”

If the market had failed at the 50% retracement line, it would have confirmed the beginning of the bear market. However, the market climbed above the lows from October and November and the 50-dma clearing the first two levels of very tough resistance.

Importantly, while the market did break above the first level of resistance, it is currently NOT confirming the change to a bear market just yet. As shown in the chart below, the 2015-2016 correction ended when the market broke above, and successfully retested the 200-dma. That put the market back on a bullish price trend above that running moving average.

Currently, despite the sharp rally from the December 24th lows, the market remains in a down trend and below the 200-dma. Such continues to suggest the correction remains intact and a retest of lows is likely over the next couple of months.

This complies with my statement from last week:

“In order for the bulls to regain control of the market narrative, it will require a push back above the November highs and the 200-dma. Only then can the ‘bear market correction of 2018’ be officially declared ‘dead.’“

However, given that “no one” can actually predict the future with any degree of accuracy, all we can do is make some educated guesses about where the markets go over the next few months. The chart below represents the four of the most probable outcomes out of a multitude of possibilities. (In other words, these are my “best guesses” as to where prices head to next.)

Pathway #1: While this is the most “hoped” for outcome, it is also the one with the lowest probability of coming to fruition. While there is a reasonable argument to be made provided Central Bank liquidity continues, the Administration drops the “trade war” rhetoric, and the Government “shut down” ends, there is a tremendous of downward pressure on prices currently keeping probabilities low.  (Probability 10%)

Pathway #2: Given the extreme overbought condition of the market, a pullback is likely. The most bullish would be a retest of the Oct/November lows that works off the short-term overbought condition. This would provide the best opportunity for a push above the 200-dma. Given the overbought short-term condition of the market, the compressed rise in prices, and extension from the lows, a correction is likely to entail a bigger draw down. (Probability 20%)

Pathway #3: Like Pathway #2, it is likely the market pulls back but breaks the previous support line instead. Such leads to additional selling pressure but the market finds support at the previous 38.2% Fibonacci retracement level. Such would set the market up for a subsequent rally, but the odds are the rally will fail at the 200-dma keeping downward pressure on the markets near-term. (Probability 40%)

Pathway #4: Is a resumption of the “bear market” trend in the weeks ahead that retest lows much like what was seen during the 2015-2016 correction process. (Probability 30%)

I know. That isn’t really helpful in terms of positioning near term, but the reality is that, currently, the majority of outcomes still lean to the “bearish” side of the ledger.

Zerohedge had a very good summation on these points as well.

“There are three things, among others, that leap out to me as problematic for a seamless return to the Goldilocks scenario:

None of this might be today’s actionable news. But it’s important to keep reminding yourself that there is nothing static about global realities nor what, in the long run, are reliable correlations and havens. While not learning from the past is folly, forgetting the context of the moment is equally dangerous.”

There is no doubt the rally from the recent lows has been “breath taking.”

However, as noted, the rally is currently running in defiance of the underlying fundamentals which are likely to “matter” sooner, rather than later. 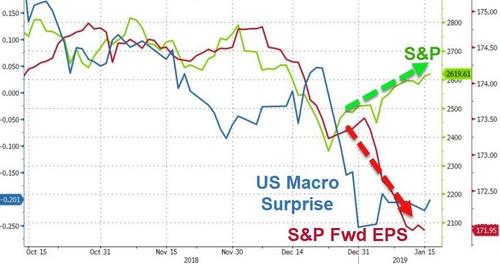 With earnings season underway, there is support in the short-term for asset prices but remember that earnings are only beating sharply downgraded estimates. (This is the equivalent of companies scoring a 71 after the level for an “A” was reduced from 90 to 70)

While the S&P 500 recovered more than half of its prior bear-market loss in only 17 days, this type of rally is often met with short-term weakness.

The weight of evidence suggests a retest of support at which time portfolios can be re-evaluated.

However, while many are suggesting the “bear market” is now officially over, the reality is that it is entirely too soon to make such a commitment. The current rally remains within an overall downtrend and is entirely consistent with the beginnings, not the endings, of more major bear market cycles.

We continue to run our portfolios with higher levels of cash, fixed income, and tighter stops on our current long-equity exposure until such time as the weight of evidence suggests differently.

Source: Bulls Take Round One, But…