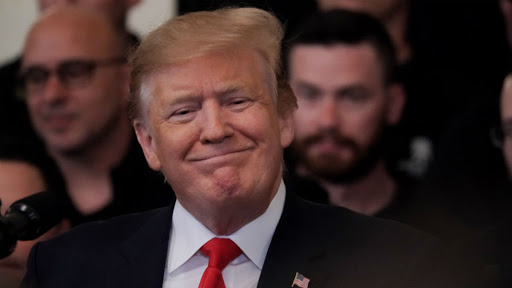 President Trump’s approval rating stands at its highest level in two years, according to a CNN poll released on Wednesday.

Trump’s 43 percent approval rating is the highest since a CNN poll conducted in April 2017 around the 100-day mark of his presidency. His disapproval rating stands at 52 percent in the new survey.

The president’s job approval rating now includes roughly half — 46 percent — of all independents and 86 percent of Republicans. Only 5 percent of Democrats gave Trump a favorable performance review.

In addition, 59 percent of respondents said they do not feel that Trump should be impeached and removed from office, compared to 37 percent who said he should be ousted.

The poll comes after special counsel Robert Mueller concluded his investigation into Russian interference in the 2016 presidential election.

Mueller released a redacted version of the report last month, which stated that the special counsel was unable to “conclusively determine”  that no criminal conduct occurred regarding whether Trump obstructed justice.

Nearly half of the CNN poll’s respondents — 48 percent — said they believed Trump committed obstruction of justice during the course of the investigation, compared to 45 percent who said he did not.

Fifty-eight percent want Congress to investigate whether Trump committed obstruction of justice during the course of the Mueller probe, according to the CNN poll. And a majority — 61 percent — said they want their representatives to pursue legal action to obtain the full, unredacted version of the report.

A Justice Department spokeswoman said Tuesday that Mueller expressed “frustration” to Attorney General William Barr in late March over the lack of context in the attorney general’s four-page memo describing his investigation’s findings.

Mueller sent a letter stating that Barr’s March 24 memo on his report did not “capture the context, nature, and substance” of his findings.

Forty-eight percent in the new poll said they have a favorable opinion of Mueller himself, up from 36 percent last fall. Additionally, 59 percent said they approve of the way he handled the investigation, up from 48 percent before it was completed, according to CNN.