Authored by Giulio Meotti via The Gatestone Institute,

Three years ago, the Italian government made a shameful decision.It veiled its antique Roman statues to avoid offending Iran’s visiting President Hassan Rouhani. Nude statues were encased in white boxes. A year earlier, in Florence, another statue featuring a naked man in Greco-Roman style had also been coveredduring the visit of the crown prince of Abu Dhabi. Now, one of the most famous British art galleries has covered two paintings, after Muslim complaints that they were “blasphemous“.

At the Saatchi Gallery in London, two works, again featuring nudes, this time overlaid with Arabic script, prompted complaints from Muslim visitors, who requested that the paintings be removed from the Rainbow Scenes exhibition. In the end, the paintings were covered with sheets. “The Saatchi is behaving like Saudi Arabia, hiding from public view artworks that blaspheme against Islam”, commented Brendan O’Neill on Spiked. One expert described the paintings as “The Satanic Verses all over again“. The reference was to the book by Salman Rushdie, a British citizen, published in 1988. Iran’s “Supreme Leader” Ayatollah Ruhollah Khomeini in 1989 condemned Rushdie to death for writing the book. The bounty on Rushdie’s head was increased to $4 million in 2016 when a group of Iranians added $600,000 to the “reward” — with no protest from Britain.

It was after Rushdie’s The Satanic Verses that many Western publishing houses began bowing to Islamist intimidation. Christian Bourgois, a French publishing house that had bought the rights, refused to publish The Satanic Verses. It was the first time that, in the name of Islam, a writer was condemned to disappear from the face of the earth — to be murdered for a bounty. 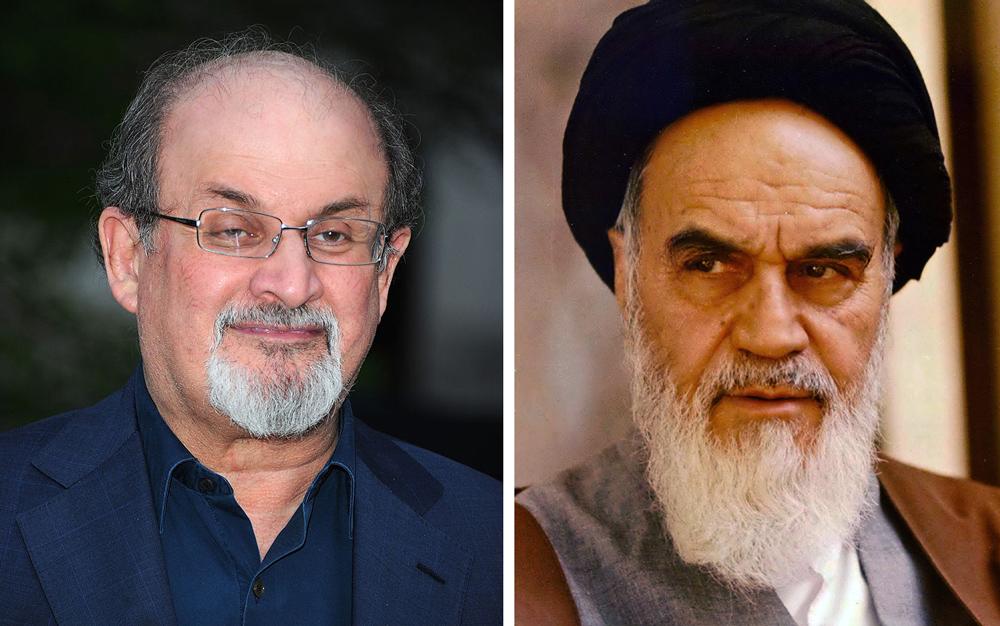 Rushdie is still with us, but the murder in 2004 of Theo van Gogh for producing and directing a film, “Submission”, about Islamic violence toward women; the death of so many Arab-Islamic intellectuals guilty of writing freely, the Danish cartoon riots and the many trials (for instance, here and here) and attempted murders (such as here and here), the slaughter at the French satirical magazine Charlie Hebdo, the attacks after Pope’s Benedict speech in Regensburg, the booksand scripts cancelled, the depictions of Muhammad closeted in the warehouses of museums, and the increasing threats and punishments, including flogging, to countless journalists and writers such as Saudi Arabia’s Raif Badawi, should alarm us — not bring us to our knees.

As the Saatchi Gallery’s capitulation shows, freedom of speech in Europe is now exhausted and weak. So far, we have caved in to Islamic extremists and Western appeasers. It is the tragic lesson of the Rushdie case 30 years later: no author would dare to write The Satanic Verses today; no large publishing house such as Penguin would print it; media attacks against “Islamophobes” would be even stronger, as would the bottomless betrayal of Western diplomats. Also today, thanks to social media as a weapon of censorship and implicit mass threats, any author would probably be less fortunate than Rushdie was 30 years ago. Since that time, we have made no progress. Instead, we have been seeing the jihad against The Satanic Verses over and over again.

“Nobody would have the balls today to write ‘The Satanic Verses’, let alone publish it,” said the writer Hanif Kureishi.

“Writing is now timid because writers are now terrified”.

According to the author Kenan Malik, writing in 2008:

“What we are talking about here is not a system of formal censorship, under which the state bans works deemed offensive. Rather, what has developed is a culture of self-censorship in which the giving of offence has come to be seen as morally unacceptable. In the 20 years since the publication of The Satanic Verses the fatwa has effectively become internalised”.

The Rushdie affair also seems to have deeply shaped British society. The Saatchi Gallery’s surrender in London is not unique. The Tate Britain gallery shelved a sculpture, “God is Great”, by John Latham, of the Koran, Bible and Talmud embedded in glass. Christopher Marlowe’s “Tamburlaine the Great” was censoredat the Barbican Centre. The play included a reference to the Prophet of Islam being “not worthy to be worshipped” as well as a scene in which the Koran is burned. The Whitechapel Art Gallery in London purged an exhibit containing nude dolls which could possibly have upset the Muslim population. At the Mall Galleries in London, a painting, “ISIS Threaten Sylvania”, by the artist Mimsy, was censoredfor showing toy stuffed-animal terrorists about to massacre toy stuffed-animals having a picnic.

At the Royal Court Theatre in London, Richard Bean was forced to censor himself for an adaptation of “Lysistrata”, the Greek comedy in which the women go on a sex strike to stop the men who wanted to go to war. In Bean’s version, Islamic virgins go on strike to stop terrorist suicide bombers.

Unfortunately, in the name of fighting “Islamophobia”, the British establishment now appears to be submitting to creeping sharia: and purging and censoring speech on its own.

Recently, some major conservative intellectuals have been sacked in the UK. One is the peerless philosopher Roger Scruton, who was fired from a governmental committee for saying that the word “Islamophobia” has been invented by the Muslim Brotherhood “to stop discussion of a major issue“.

Then it was the turn of the great Canadian psychologist Jordan Peterson, whose visiting fellowship at Cambridge University was rescinded for posing with a man wearing an “I’m a proud Islamophobe” T-shirt. Professor Peterson later said that the word “Islamophobia” has been “partly constructed by people engaging in Islamic extremism, to ensure that Islam isn’t criticised as a structure”.

The instances of Scruton and Peterson only confirm the real meaning of “Islamophobia”, a word invented to silence any criticism of Islam by anyone, or as Salman Rushdie commented, a word “created to help the blind remain blind”. Where is the long-overdue push-back?

Writing in 2008, The Telegraph‘s Tim Walker quoted the famous playwright Simon Gray saying that Nicholas Hytner, director of London’s National Theatre from 2003-2015, “has been happy to offend Christians,” but “is wary of putting on anything which could upset Muslims.” The last people who did so were the journalists of the French satirical magazine Charlie Hebdo. They paid with their lives. By refusing to confront the speech police, or to support freedom of expression for Salman Rushdie, Roger Scruton, Jordan Peterson, Charlie Hebdoand Jyllands-Posten — just the tip of a huge iceberg — we have started down the road of submission to sharia law and to tyranny. We all have been covering up our supposedly “blasphemous” culture with burqas to avoid offending people who do not seem to mind offending us.
— Read on www.zerohedge.com/news/2019-06-17/covering-our-culture-avoid-giving-offense