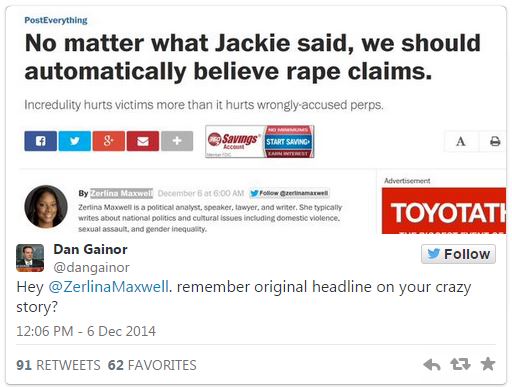 The purpose of this post is to make the case that claims of rape and sexual assault should be made to the police, investigated by the police, and then proceed to trial. We should not punish men for charges that are made outside of the criminal justice system. Let’s take a look at some previous cases and studies to see why not.

Here’s one reported by the far-left Newsweek:

The magazine has settled a defamation lawsuit filed by the University of Virginia fraternity at the center of the 2014 blockbuster feature by Sabrina Erdely, which was retracted after key details in the story were called into question. According to reports, Rolling Stone will pay a settlement amounting to $1.65 million.

The article, which was published in late fall 2014, described an alleged…

1 thought on “How often are accusations of rape or sexual assault false?”