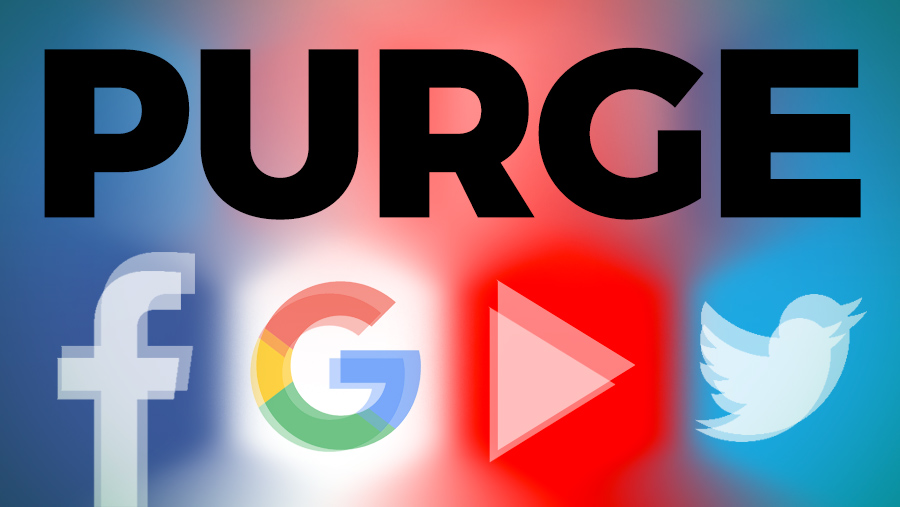 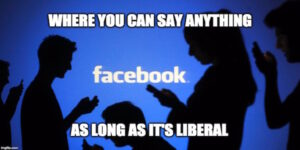 Big tech censors conservatives and the media yawns. With mounting evidence, Facebook, Google, and YouTube seem to be doing to the Internet what the radical, socialist Left has done to American universities: giving lip service to the idea of free speech. If you’re Christian, conservative, Jewish, or Republican, you can have your beliefs, but just keep them to yourself, thank you very much.

The individuals and organizations that have been affected by censorship are too many to list here. While Antifa, which supposedly means “anti-fascist,” holds their intolerant and violent ‘Hate Trump’ protests, Facebook is banning accounts, Google is censoring search results, and Youtube is taking down or deleting conservative videos.

The danger here is obvious: No person or company should be deciding what the public gets to see and what they do not based on individuals in high positions determining what’s important or newsworthy. The biased, liberal media in America already does this so it is vital we fight for both sides to be heard or at least fight to maintain freedom of speech.

Remember what the Obama administration IRS did to Christian and conservative non-profits? The main difference here is we’re in the arena of social media.

Prior to a subcommittee hearing last week on Big Tech companies censoring conservatives, Senator Ted Cruz said the Department of Justice should investigate Google for fraud and breach of contract. Cruz chairs the Senate Committee on the Judiciary’s Subcommittee on The Constitution, and in a Fox News interview, he compared Big Tech’s censorship practices to those of Big Brother in the novel, “1984”:

Suggesting these big companies have a political agenda, which they do, and saying they’re guilty of fraud and deceiving the consumer, Cruz continued:

“When you sign up, say with a Facebook or Twitter, you assume that, if you follow someone, you’ll see their tweets, you’ll see their posts. Likewise, you assume if someone follows you, they’ll see what you tweet and what you post. That’s not, in fact, what’s happening. What’s happening is the social media sites are censoring, they’re shadow banning. If they don’t like what you’re saying, they just hide what you’re saying.

“The big tech companies like Facebook and Google are trying to choke us out, and have demonetized our content, cutting off our income that helped sustain our ministry. [We must] fight back against the progressive agenda and biased censorship.”

Conservative radio talk show host, author Dennis Prager created, “Prager University” and puts out free, short educational videos on subjects “important to understanding American values” — ranging from the astronomical cost of higher education to the motivations of the Islamic State. YouTube has been restricting many of these videos by labeling them as violent or having sexual content.

Prager filed a lawsuit and recently testified before Congress on Capitol Hill that Google violates the First Amendment by censoring conservatives. PragerU stated:

“There is no excuse for Google and YouTube censoring and restricting any PragerU videos, which are produced with the sole intent of educating people of all ages about America’s founding values,”

Journalist, James O’Keefe has gone through this for years due to uncovering many scandals exposing the left. Just last month, YouTube pulled down a Project Veritas video that showed Pinterest’s anti-Christian bias. An insider told O’Keefe that Pinterest listed Live Action as pornographic. They also censored Bible verses!

Then, shortly after Project Veritas sent out their story by Twitter, their account was locked down for allegedly distributing communications belonging to another party.

Tech giants retaliating against insider who leaked docs showing censorship of Christian and pro-life material. They have REMOVED our investigative insider report. YouTube now fighting bullet-proof journalism by deleting it.

A popular Christian ministry helping people understand the times and contend for the faith, Jan Markell’s Olive Tree Ministries, was briefly shut down four years ago by YouTube.

Christian radio program, Stand Up for the Truth has been shadow-banned on Facebook for several years now.

My colleagues at Freedom Project were recently “shadow banned” for an entire week on Facebook. Shadow-banning means you can still post content but nobody sees your post: it does not show up in people’s news feed. The only way someone sees it is if they happen to go directly to the Freedom Project Facebook page.

“It is hypocritical in the extreme for Facebook to claim its commitment to free speech while simultaneously handcuffing conservative content that starts to become popular and in demand. If you’re a conservative rising in popularity, you can speak, but they won’t let anyone listen.”

“I am not sure if I should be flattered or offended that Facebook feels the need to shadow ban our organization. It does prove that no one is free from judgment by the powers that be at Facebook. If you dare speak Truth, Facebook will turn into Liam Neeson in Taken. They will look for you, they will find you, and they will censor you. Our founders understood the necessity of free speech, but Mark Zuckerberg does not care about history, facts, or Truth. Do not be like Mark Zuckerberg.”

Freedom Project Producer, Mike Menzel notified me yesterday that after seven days, their posts are finally reaching people again on the social media giant. He’s skeptical about how long their freedom of speech will last. You might be wondering why a Christian-based conservative organization specializing in on-line education is such a threat.

For pointing out hypocrisy, truth, and talking about controversial issues. Menzel stated:

I almost guarantee you the story about the high school girl who didn’t think it was fair that she had to compete with guys is what triggered the ban on us. Facebook is on the war path to shut down any story that involves transgender people. They want to be their protector. Facebook basically prevented people from seeing our posts, but never notified us as to why.

Years ago, while researching for my very first book, ERADICATE: Blotting Out God in America, Google was a quick go-to if I needed a source or reference. What I found out is that Christian and conservative search results are pushed down and suppressed. In many cases, I knew the book or article I was looking for but I typically had to scroll down through pages and pages of results in order to get to it. Liberal outlets and websites almost always come up first.

Being privately owned companies, Facebook, Google, and YouTube are free to set their own standards and censor whomever they wish, but it sure is a glaring admission of bias and hypocrisy. Why? They are sabotaging their claim to be a platform for all people and for the free expression of ideas.

Truth defenders need to come together, raise awareness on social media, and expose this ongoing intolerance of the Christian worldview. We need to be salt and light in the world and, rather than be on defense, soldiers of Christ must storm the gates of hell!

Without virtue, our free republic under God cannot be sustained. Bible-based values and the Constitution is what helped establish the foundation of this exceptional nation. If the current environment of one-sided tolerance and censorship continues to be allowed, our freedoms won’t last – and neither will America.

If you like this article, please share it! God bless you and keep speaking the truth about things that matter.