For this is good and acceptable in the sight of God our Savior, who desires all men to be saved and to come to the knowledge of the truth.

It is difficult for us to recommend a business, service, or product to others when we haven’t tried it ourselves. We can tell them what we have heard about it, but there is no personal experience from which to draw.

When other people come to us and ask us about salvation, and we doubt the validity of God’s promise that our salvation is eternally secured in Him, how can we share our faith with confidence?

There are many reasons why people doubt their salvation. They question how a loving God would allow tragedy. They believe that works, not grace, save them. They fail to take God at His word. They remain living a life of sin, unwilling to submit to the authority of the Lord in their lives. But God’s Word gives us all the assurance we need in order to know that our salvation is secure in Him, giving us the confidence to share our faith with others.

First Timothy 2:4 reminds us that God “desires all men to be saved and to come to the knowledge of the truth.” And John the Baptist told us, “He who believes in the Son has eternal life; but he who does not obey the Son will not see life” (John 3:36 nasb).

In understanding that our salvation is secure and that God desires all men to know the truth, we can go forth with boldness and tell those around us the reason for our hope.

Lord, I know with surety that my salvation is firm in You. Show me how to convey this to others who are full of doubt and confusion about their salvation.[1]

China’s money supply stands at Rmb192tn, equivalent to $28tn. It equals the size of broad money supply in the US and the eurozone put together, yet China’s nominal GDP is only two-thirds that of the US.

Back in the days of the Fed’s QE, much of thinking analyst world (the non-thinking segment would merely accept everything that the Fed did without question, after all their livelihood depended on it), was focused on how massive, and shocking, the Fed’s direct intervention in capital markets had become. And while that was certainly true, what we showed back in November 2013 in “Chart Of The Day: How China’s Stunning $15 Trillion In New Liquidity Blew Bernanke’s QE Out Of The Water” is that whereas the Fed had injected some $2.5 trillion in liquidity in the US banking system, China had blown the US central bank out of the water, with no less than $15 trillion in increases to Chinese bank assets, all at the behest of a juggernaut of new credit creation – be it new yuan loans, shadow debt, corporate bonds, or any other form of debt that makes up China’s broad Total Social Financing aggregate. 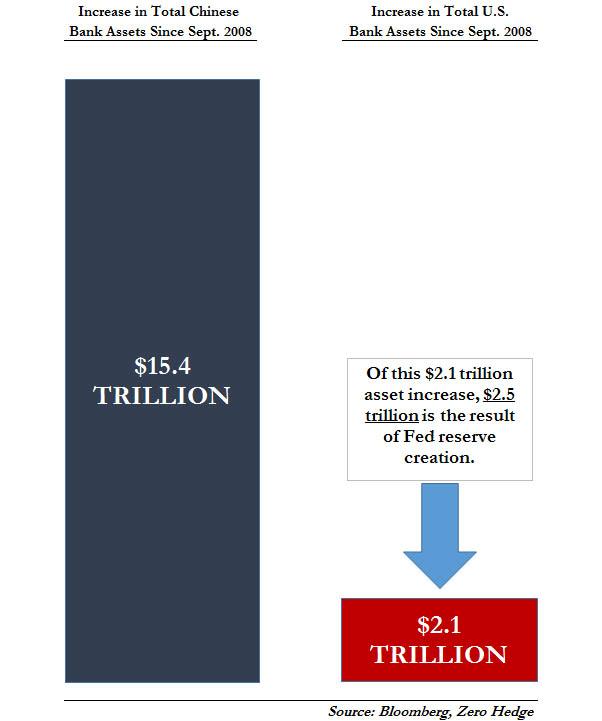 Now, almost six years later, others are starting to figure out what we meant, and in an Op-Ed in the FT, Arthur Budaghyan, chief EM strategist at BCA Research writes about this all important topic of China’s “helicopter” money – which far more than the Fed, ECB and BOJ – has kept the world from sliding into a depression, and yet is blowing the world’s biggest asset bubble.

Budaghyan picks up where we left off, and notes that over the past decade, Chinese banks have been on a credit and money creation binge, and have created RMB144Tn ($21Tn) of new money since 2009, more than twice the amount of money supply created in the US, the eurozone and Japan combined over the same period. In total, China’s money supply stands at Rmb192tn, equivalent to $28 TRILLION. Why does this matter? Because Chine money’s supply is the size of broad money supply in the US and the eurozone put together, yet China’s nominal GDP is only two-thirds that of the US.

This, as the BCA analyst explains, is a major problem.

Below we repost his latest FT Op-Ed, which explains why – as we said in the 2019 year ahead post  – we remain confident that the spark for the next global financial crisis will be in China.

China’s ‘helicopter money’ is blowing up a bubble, authored by Arthur Budaghyan is chief emerging market strategist at BCA Research, and first published in the FT.

The escalation of the trade conflict between the US and China has raised the likelihood of greater stimulus by Beijing to prop up the economy. While China’s excessive debt isn’t news, investors must wake up to the reality of “helicopter money” — enormous money creation by Chinese banks “out of thin air”.

While this sugar rush may provide short and medium-term cover for investors, the long-term effects will exacerbate China’s credit bubble. China, like any nation, faces constraints on frequent and large stimulus, and its vast and still rapidly expanding money supply will produce growing devaluation pressures on the renminbi.

When a bubble emerges we are often told that this bubble is different. Many economists justify China’s credit and money bubble and continuing stimulus by pointing to the nation’s high savings rate. But this narrative is false. At its root is the idea that banks are channelling or intermediating deposits into loans. This is not how banks operate.

When a bank expands its balance sheet, it simultaneously creates an asset (say, a loan) and a liability (a deposit, or money supply). No one needs to save for this loan and money to be originated. The bank does not transfer someone else’s deposits to the borrower; it creates a new deposit when it lends.

Banks also create deposits/money out of thin air when they buy securities from non-banks. As banks in China buy more than 80 per cent of government bonds, fiscal stimulus also leads to substantial money creation. In short, when banks engage in too much credit origination — as they have done in China — they generate a money bubble.

Over the past 10 years, Chinese banks have been on a credit and money creation binge. They have created Rmb144tn ($21tn) of new money since 2009, more than twice the amount of money supply created in the US, the eurozone and Japan combined over the same period. In total, China’s money supply stands at Rmb192tn, equivalent to $28tn. It equals the size of broad money supply in the US and the eurozone put together, yet China’s nominal GDP is only two-thirds that of the US.

In a market-based economy constraints are in place, such as the scrutiny of bank shareholders and regulators, which prevent this sort of excess. In a socialist system, such constraints do not exist. Apparently, the Chinese banking system still operates in the latter.

In the long run, more stimulus in China will entail more money creation and will heighten devaluation pressures on the renminbi. As we all know, when the supply of something surges, its price typically drops. In this case, the drop will take the form of currency devaluation.

As it stands, China’s money bubble is like a sword of Damocles over the nation’s exchange rate. Chinese households and businesses have become reluctant to hold this ballooning amount of local currency. Continuous helicopter money will increase their desire to diversify their renminbi deposits into foreign currencies and assets. Yet, there is no sufficient supply of foreign currency to accommodate this conversion. China’s current account surplus has almost vanished.

As to the central bank’s foreign exchange reserves, at $3tn they are less than a ninth of the amount of renminbi deposits and cash in circulation. It is inconceivable that China can open its capital account in the foreseeable future.

If China chooses the path of unrelenting stimulus, investors should recognise the long-term negative outlook for the renminbi. Continuous stimulus will beef up investment returns in local currency terms, but currency depreciation will substantially erode returns in US dollars or euros in the long run.

The investment implications go beyond Chinese markets. Market volatility over the past few months as the talk of stimulus picked up has given us a peek into the future. As the renminbi has depreciated by 12 per cent since early 2018, the pain has reverberated across Asian and other emerging markets. The MSCI Asia and MSCI EM equities indices have each fallen 24 per cent in dollar terms since their peak in January 2018. Long-term pressures could play out even more dramatically.

Fortunately, Chinese authorities recognise these issues. Yet they face an immense task of stabilising growth while containing credit and money expansion. This will be hard to achieve in an economy that has become addicted to credit creation.

I, therefore, the prisoner of the Lord, beseech you to walk worthy of the calling with which you were called.

In coming to the United States shortly after her release from a Nazi concentration camp, Corrie Ten Boom, author of The Hiding Place, was answering the call of God for her life.

However, that calling did not go unchallenged. Time after time Corrie’s presence in the United States was questioned. The little support she had in the beginning dwindled. She was tempted to become discouraged but refused. Beneath any thoughts of rejection were a peace and a hope that God would honor her obedience.

When others rejected her, Corrie held fast to the promises of God. Finally her commitment paid off. A door of opportunity opened through a well-known Christian evangelist. Soon Corrie Ten Boom became one of the most recognized Christian speakers of our time. She weathered life’s most severe storms and was found worthy of God’s call.

God has called you to be a light of His love and forgiveness to a world locked away in utter darkness. Therefore, walk worthy of His call. When discouragement comes, stand firm in your faith, and God will mold you into an instrument of His love to others.

Dear Lord, You have called me to be a light as I travel through this world. Use me to minister to others I encounter on my journey.[1]

Fired FBI Director is not out of the woods yet.

As reported earlier he still is facing scrutiny in at least two other investigations.

Next up will be the IG’s findings regarding Comey’s truthfulness before the Foreign Intelligence Surveillance Act (FISA) court and whether he attested to false or misleading statements in order to electronically monitor a presidential campaign.

That determination may not be as cut-and-dried as many think it is, but it hopefully, at a minimum, will explain why Comey believed he could sign off multiple times on a FISA application based largely on information that he, himself, described as “salacious and unverified.” His exposure here is potentially much more devastating than breaking FBI record retention and handling rules.

Close behind the IG’s second report will be findings by U.S. Attorney John Durham whether Comey and his rogue team of investigators violated FBI and departmental guidelines to initiate a counterintelligence investigation into a presidential campaign. They will determine if Comey had adequate justification for launching such an unprecedented investigation.

But beyond that, Mr. Durham and his team likely will follow up on emerging indicators that Comey may have colluded with other intelligence community leaders to actually “manufacture” the justification needed for an investigation by targeting covert informants against campaign representatives in violation of established policies and procedures.

In short, James Comey is not out of the woods after the first IG report, which has exposed him as someone who casually and carelessly disregarded established rules and regulations. It is not a stretch to imagine that this disregard carried over into other more serious areas of potential abuse of authority.

via Former FBI Assistant Director: The Worst Is Still to Come for Fired FBI Director James Comey — The Gateway Pundit