The People’s Liberation Army’s garrison HQ is one of the most visible landmarks of Hong Kong island, a constant symbol of the fact that China can fully take over Hong Kong in minutes…

Hong Kong ranks among the freest societies in the world. Not only economically, but socially it is a very liberal place. It was marinated in British ways until 1997, much longer than Singapore and other colonies. Then China took it over as a special administered region, which according to the agreement with the UK meant that it was only nominally to be under Chinese control for the next 50 years. It was possibly the only colony in which a vast majority of citizens did not want the British to go.

For most of the past 22 years, China has been easy on Hong Kong, despite the fact that the People’s Liberation Army’s garrison headquarters is one of the most visible landmarks of Hong Kong island, a constant symbol of the fact that China can fully take over Hong Kong in minutes, if it wants to.

This alone is enough to generate fear and hate among the people of Hong Kong. It does not help that they are conscious and made aware every day by the hordes of visiting tourists from China — through what are seen as their rather less sophisticated ways, their rudeness and misbehavior — that the far less developed country of China controls one of the richest societies on the planet.

Nouveaux riches from China buy properties in Hong Kong, driving up prices, their children take up slots in good schools, and they put buying pressure on edible goods, such as milk powder, etc., that have a high risk of being adulterated in China. Or at least this is what the people of Hong Kong think. 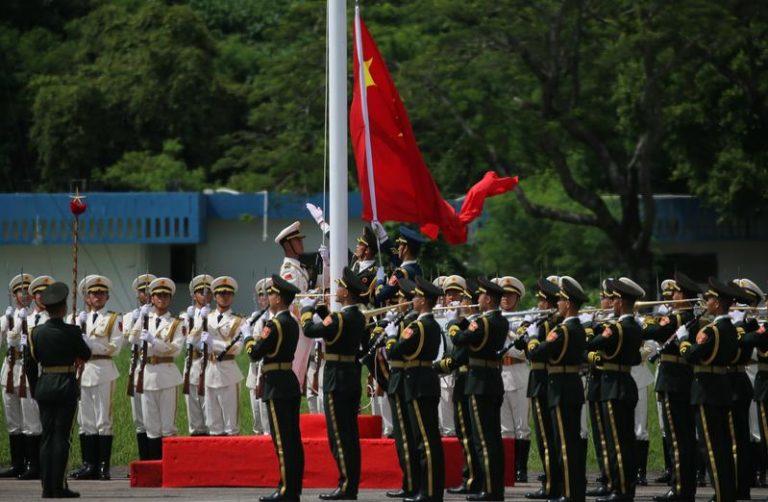 China has built ultramodern infrastructure in the region. It is now possible to cross the sea from Hong Kong to Macau using the world’s longest bridge, which is 55 kilometers long and cost a whopping $19 billion to build. Bullet trains now run from the heart of Hong Kong to Shenzhen in a mere 15 minutes for a cost of $10, and to Guangzhou in a mere 50 minutes.

Shenzhen and Guangzhou are cities that were the fountainhead of the Chinese economic miracle when Deng Xiaoping made them the places for experiments in free-market capitalism in 1979.

The area adjoining Hong Kong continues to be the heart of Chinese manufacturing. It is a hive of energy, activity, progress, and optimism unlike anywhere else on the planet. In many ways, technology is more customer friendly in East Asia than it is in the West.

The enormity of this can be appreciated only by those who visit. I often go to China, where I hold a long-term visa, and I go to Hong Kong often enough that I am allowed to pass the immigration eChannel that its citizens use, without the need to talk with any officer. 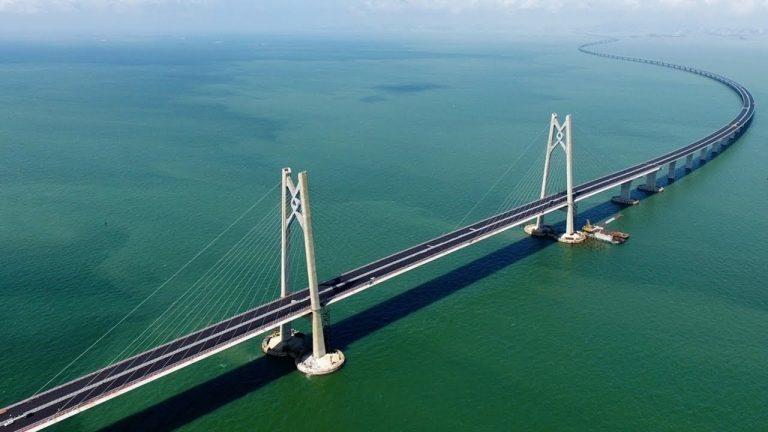 I am extremely fond of China, and see it as the future of humanity, and certainly as the only Third World country — if at all it can be considered that any more — that has the potential to become a developed society.Culturally and economically, it has been on a rapid upward trend. Chinese today compete with the best in the world, and their creativity has been unleashed.

In many areas of research, Chinese organizations produce more quality and quantity of output than any other country on the planet, including the US. The reading habit is increasing rapidly among Chinese. There are tens, perhaps hundreds, of Chinese cities whose downtowns look more modern than those in the most developed parts of the world.

China owes a lot of its growth to Hong Kong, Taiwan, and Singapore, countries that were able to channel both Western technology, adapted for Chinese culture and language, and Western investments.

China became successful by copying Western technology and often improving on it, something that I, unlike others in the West, see as a massive achievement — because copying is not all that easy, as is demonstrated by the failure of the other Third World countries to do the same. China owes its gratitude to the West for enabling this.

Rise of the Nationalist Emperor

Time has moved on, and gratitude has faded, or perhaps it never existed — the concept of national gratitude hardly exists outside the West and Japan. And China’s egocentric president Xi Jinping has inserted his thoughts in the constitution of China, declared himself a lifetime president, implemented a tyrannical social credit system, and taken a heavy-handed policy toward neighboring countries. In his overconfidence, he appears to think that China has arrived and can fight a trade war with the US head-on.

Xi has likely surrounded himself with yes-men and with others too fearful to speak. His arrogance and his distance from the ground realities are weaving a web of entanglements for China. Xi has helped to accentuate a sense of nationalism among Chinese. Out of jealousy and an inferiority complex, Chinese nationalists act big-brotherly toward Taiwan and Hong Kong, both highly developed societies. 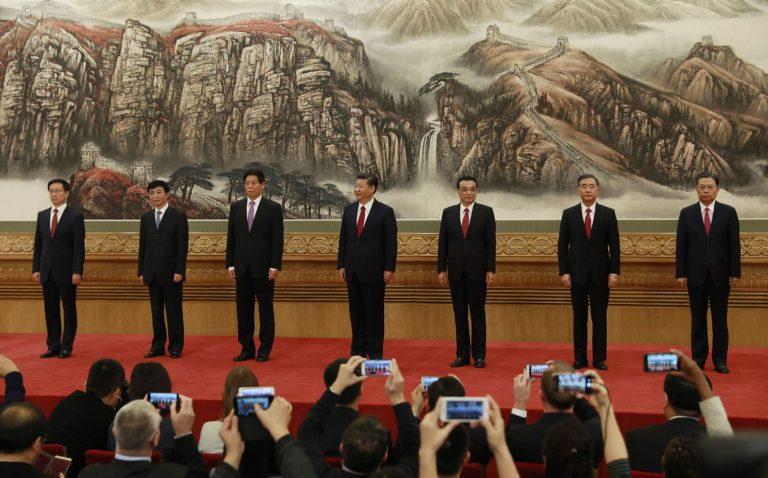 But in a country where face value is very important, where the central government is the key stabilizing force, and where decisions once taken cannot be easily reversed, Xi cannot afford to look weak. In a country of 1.39 billion people, this has created massive systemic risk.

Unfortunately, by fueling nationalism, by engaging in a trade war with the US — a war that could have been avoided had he agreed to play fair — by being heavy-handed in contrast to tilting toward the rule of law, and by constantly interfering in Hong Kong, Xi is making China unstable. At best he is seriously retarding its progress.

When in 2014 Xi tried to influence Hong Kong’s electoral process, massive protests arose. Today, Hong Kong once again finds itself in the crosshairs of China. The new protests, enormous and intense, are against China’s attempt to institute a law enabling extradition of Hong Kong residents to mainland China. Xi miscalculated. The protesters have come to conclude that China wants — by hook or by crook — to incorporate Hong Kong fully into China, something the people of Hong Kong are very paranoid about. 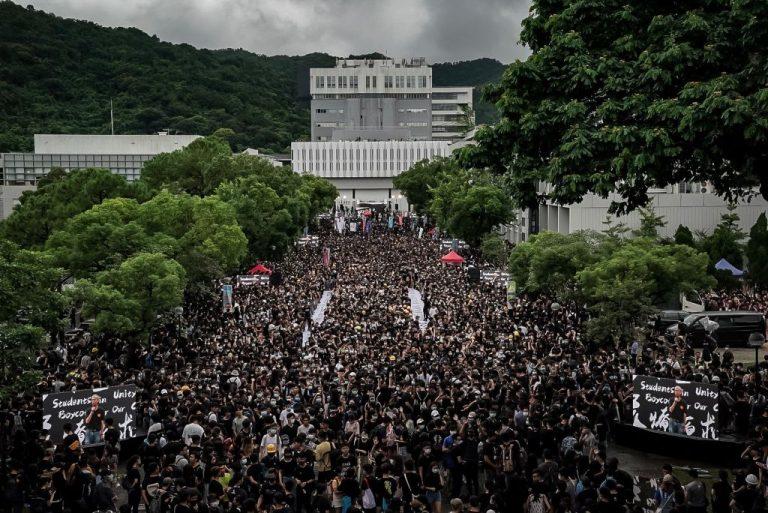 Hong Kong protests – the controversial extradition bill has in the meantime been withdrawn. [PT] Photo by Anthony Kwan / Getty Images

Hong Kong people are not like those who were at Tiananmen Square in 1989. The people of Hong Kong lack conditioning in fear-based control. They will fight much longer and harder, and will do everything possible to attract international attention.

According to the agreement that China had with the UK, it was to keep Hong Kong politically independent until 2047. But Xi cannot keep his hands off the golden-egg-laying goose. He and nationalist Chinese fail to understand that Hong Kong under the party’s control will no longer be Hong Kong, and will break one of the major channels of progress for China.

But if he has to pull back, the reverberation will embolden those elements within China that want democracy. This is a lose-lose interference — because democracy would be a disaster for China.

Across the political spectrum, from the Right to the Left, the people of Hong Kong tend to like the West. Many would have preferred to be continued to be ruled by the UK. They fly the Union Jack or the American flag to show their affiliation. The central theme organizing the protesters is a desire for a democratic process, unrestrained by China.

But despite their liking for the West, a large number of people in Hong Kong exist in situations that would not be approved of in the West.Live-in maids who must stay away from their families in Indonesia and the Philippines, lower-class workers who must share a small room, often with the same bed shared among those working in shifts — there are many such examples.

They all go against the sensitivities of the egalitarian forces in today’s West. Of course, these people exist because they get a better deal in Hong Kong than they would have where they grew up. Insisting that they get better working conditions would only mean that they would not have a place in Hong Kong and would be forced to stay in their home countries. Life is tough, but the free market offers them the best deal. 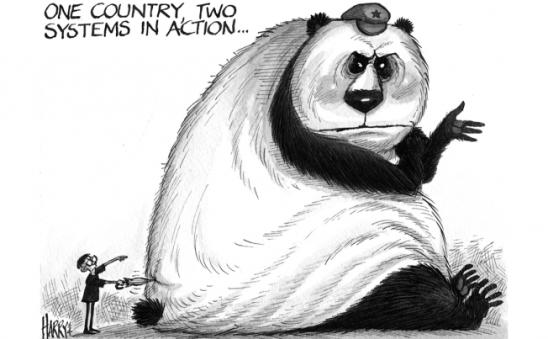 Democracy, by igniting populist forces, will destroy this arrangement. Taxes will go up and interference in private property and business — the kind of interference that gets socially generated in a democracy — will significantly reduce the freedoms that make Hong Kong what it is.

Hong Kong has no minimum wages. And, interestingly, wages in Hong Kong go down when the economic situation requires. No doubt there is a huge underclass. In a democratic system, the underclass will vote for economic egalitarianism, exactly what will destroy Hong Kong’s free market — damaging the underclass the most.

But anyway, it is impossible to see Hong Kong becoming democratic. China won’t let that happen. China cannot even afford to find a compromise, for losing face would mean nationalists going against the government, destabilizing China.

The need of Xi and China not to lose face means that this situation can no longer be disentangled. Given Xi’s constant interference, democratic desire in Hong Kong is going to stay. Several of my friends living in Hong Kong are seriously contemplating moving to Singapore. I myself am investing in property companies in Singapore, but I feel sad that, irrespective of which side wins, Hong Kong will never be the same again.

I go to China often. Chinese people are clearly fearful of discussing politics in the open, often even among friends. I like the fact that they are politically not active and focus on their own circle of influence. They lack the sense of entitlement. They also lack political freedom (which often translates into a sheep expecting the fox to steal from another sheep), but they enjoy social and economic freedoms. Unlike in other poor countries, women walk around feeling mostly safe.

If Xi now gives in, even partially, to the demands of Hong Kong protesters, it will embolden those demanding democracy in China. But a democratic China would be a disaster. It would create entitlements among its people, waste their resources on political activism and introduce short-term-minded politicians and outright goons to power. 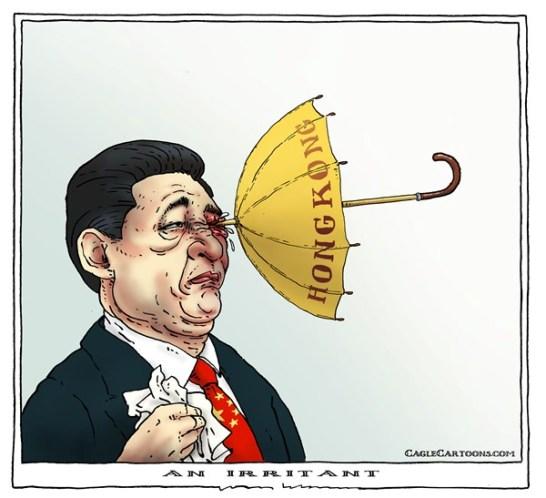 The chief is irritated… [PT]

Stability would be replaced by political infighting, and with that would also go whatever liberties there are. Measuring liberty is subjective, but I cannot think of a poor country that offers more liberty than China. I certainly feel far freer in China than in India — although the Chinese generally dislike Indians.

Whatever happens, Hong Kong will no longer be the same Hong Kong. Nor will China be the same China. And Xi is responsible for the mess, and for creating massive systemic risks threatening stability within China. I am a big fan of China and hope it finds a way out. But in retrospect, China would have been much better off never taking Hong Kong back.