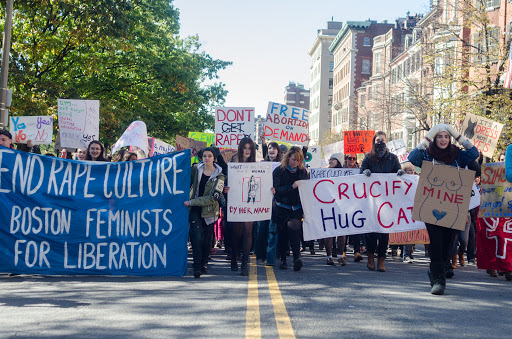 Male suicide rates are steadily growing, and the war on males has no end in sight.

I have said time and time again, that feminism is akin to cancer on the world. Some will undoubtedly question my views on feminism; I agree that

Women and men think differently.  I know this may be a shock to some,

Women also tend to take more time off than their male counterparts in the workplace. Maternity leave and personal time to care for children at home make up the majority of work absenteeism by women. Yet feminists insist that there is a gender pay gap; never once considering that men work longer hours, and are not taking as much time off.

I have never experienced this “patriarchy” that purportedly oppresses women in the workplace. There may be times when disagreements over ideas happened; however in any functioning place of work where critical thinking takes place, there will be alternate views and concepts. This is not oppression. I have even had male colleagues “go to bat for me” in the workplace, stating to our supervisors that I was the correct person to work on certain projects.

So why exactly are feminists of the modern era so angry with men? We live in a world where all the real problems and issues are taken care of, so virtue signaling and social justice has emerged to create issues to be upset over. Imagine waking up each day and looking for things to get riled up over and then deciding men are the root cause of all evil? Imagine turning men’s issues into a way for women to further play victim? Such nonsense has already occurred in the many media outlets, such as this article from Harpers Bazaar “

Men are feeling hopeless and unwanted. They are losing the ability to find purpose in life since they are repetitively enlightened by the media about how bad they are for merely existing. If you cannot find a purpose in life, what is the point in living simply to exist? This is a real problem men are facing today and it is women who caused it.

We began to see how this became a problem with the #MeToo movement. What started out as good intentions to shed light on sexual assault and harassment in and around Hollywood, and then into the common workplace, rapidly turned on its own head. When all it took was a person’s word that something happened with no actual proof, this movement started targeting men. “Believe all women” was a battle cry, and yet there is evidence that some women were lying to gain fame and payouts in the end, vilifying men and ruining careers in the blink of an eye.

More and more women are embracing their sexuality and having casual sex with random partners. It has been found that some of the allegations levied against men for sex crimes, were in fact women who later regretted their own decisions. The new ability to

Social Justice Warriors who are screaming the loudest at every possible turn, have decided that all men are a problem. You know these women; they constantly talk about how horrible men are, and how the patriarchy is holding them back.  They set out to destroy men in general.  All men are predators who are in need of being “cancelled” to these SJWs.  This leads to rabid attacks on men all over social media and out in the streets in protest, as well.

Imagine, if you will, being a young man, and all you hear is how terrible, atrocious, predatory, and downright evil men are. Does this type of nonstop barrage of demeaning language make for healthy self-esteem, or mental health? No.  An entire group of human beings is being abused and mentally battered every day, and we wonder why male suicide is on the rise?

With Mental Health Awareness in mind, it is important for SJW’s and especially 3rd wave feminists to understand that they are literally killing men. The

How about we “cancel” blame shifting for poor decisions, regrets, and making yourself feel superior by demonizing another? That would certainly be a nice change of pace. Maybe the crushing depression of feeling worthless in society will lift and some much-needed civility will return.

If you are in crisis, call the toll-free National Suicide Prevention Lifeline at 1-800-273-TALK (8255), available 24 hours a day, 7 days a week. The service is available to anyone. All calls are confidential.

H.K. Rivera is an independent political and philosophical writer