Billionaire hedge fund manager Paul Singer is the founder & CEO of Elliott Management. Singer is preparing to raise additional funds from investors to build up a war chest of cash to spend on new opportunities, as he anticipates a market downturn could be imminent, reported the Financial Times. 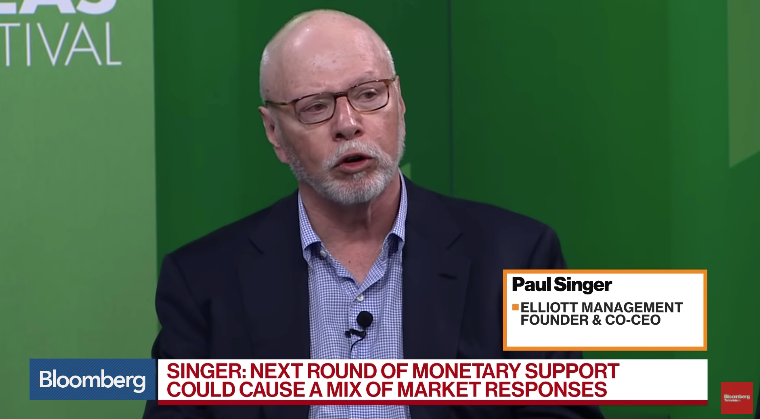 Now Singer is scrambling to raise an additional $5 billion, in a new funding round, before the cycle turns, according to FT sources.

“The hedge fund is using a drawdown structure that will feed into the main fund, an arrangement that is often used by private equity firms but has become more popular among activists,” sources said.

A drawdown structure will allow investors not to immediately front capital to Elliott but instead will be called overtime as opportunities emerge.

Elliott used a similar structure in 2017 when it raised money for market disruptions. At the time, Singer told investors in a letter that the firm wanted to raise funds before investor liquidity dried up.

FT suggests Elliott’s dash for cash is a sign that “Singer is anticipating a market meltdown. The billionaire investor, who has been vocal about complacency in global financial markets, recently predicted that the economy was headed for a significant downturn with risk at an all-time high.”

“The global financial system is very much toward the risky end of the spectrum in terms of debt,” Singer said during a panel at the Aspen Ideas Festival in July. “Global debt is at an all-time high, derivatives are at an all-time high, and it took all of this monetary ease to get to where we are today.”

In a separate report from Sunday, Claudio Borio, Head of the Monetary and Economic Department at the BIS, warned about the increasing acceptance of negative interest rates has reached “vaguely troubling” levels.

Borio said that the effectiveness of monetary policy is severely waning and might not be able to counter the next global downturn.

“The room for monetary policy maneuver has narrowed further. Should a downturn materialize, monetary policy will need a helping hand, not least from a wise use of fiscal policy in those countries where there is still room for maneuver.”

The BIS, known as the ‘central bankers’ bank,’ said the recent easing by the Fed, ECB, and PBOC, has pushed yields lower across the world, contributing to the more than $17 trillion in negative-yielding tradeable bonds.

And it should become increasingly disturbing to readers that not just a billionaire hedge fund manager [Singer] is anticipating a market crash, but as we reported Sunday, the ‘central bankers’ bank’ [BIS] is warning of imminent financial disaster.

Singer is building cash to take advantage of the coming implosion of corporate debt markets in the US.