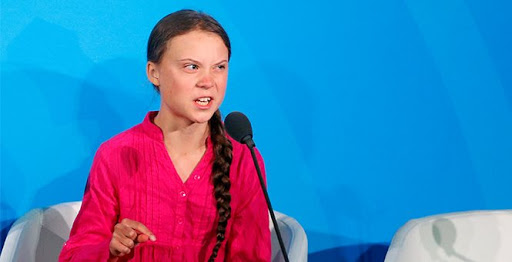 The entire American left — the mainstream media, the environmentalist movement and Democratic politicians in particular — are celebrating the involvement of teenagers and even younger children in protesting the world’s “inaction” with regard to global warming.

And not just the American left, of course. The left throughout the world is celebrating. A 16-year-old Swedish girl whose contempt for adults is breathtaking is an international hero. Congressional Democrats invited her to testify in Congress, and the United Nations has likewise invited her.

The mayor and city council of New York City further politicized their city’s public schools by allowing students to skip school to actively participate in a global warming protest.

The message of young climate change activists is: “You adults aren’t doing your job. As a result, we have no future.” As a sympathetic reporter — are there any non-sympathetic reporters? — for the Los Angeles Times put it, “(T)eens are still waiting for a sign that their elders get it.”

The Times’ coverage is typical. It reported: “Underneath the activism lies a simple truth: Young people are incredibly scared about climate change. They see it as a profound injustice and an existential threat to their generation and those that will follow. …

“‘They do worry, and they worry kind of a lot,’ said Maria Ojala, an environmental psychologist at Orebro University in Sweden. …

“Arielle Martinez Cohen” — an 18-year-old Los Angeles activist with the youth climate group Zero Hour — “remembers reading a report from an Australian think tank that warned the human species could face extinction by 2050 if society doesn’t get its act together.

“‘I almost imagine, like, an apocalypse-type thing happening,’ Arielle said.

“Many young people say they can’t fathom bringing kids of their own into the world. …

“‘That’s something that’s not realistic,’ agreed her twin sister, Yena.

“And how can they even think about college or contemplate their careers when faced with so much uncertainty?

“‘It’s something I feel every single day,’ Yena said. ‘I work really hard at school and I do all these things, and I’m like, “What am I working for? Do I have a future?”‘”

It is critical to remember that hysterias — such as Russian collusion with the Trump campaign, “endemic and systemic racism in America,” the heterosexual AIDS “crisis” in America and the “rape culture” on American college campuses — are to the left what oxygen is to biological life. No oxygen, no life; no hysteria, no left.

Apparently, however, the left-wing hysteria about global warming leading to the virtual extinction of life on Earth has not moved enough adults. Many adults who do not deny that the Earth is getting warmer — such as Danish writer and environmentalist thinker Bjorn Lomborg — do deny that the threat is “existential” and do believe that the left’s solutions, such as the Green New Deal, will damage the world far more than will carbon emissions. Proof that the left is hysterical is its unwillingness to promote nuclear power — a completely clean, non-fossil fuel-based source of power. It provides France with 70 percent of its energy. Anyone who really believes life on Earth is endangered would grasp at the nuclear power lifeboat. That they do not proves what many of us have believed from the beginning: The “existential threat” scenario is another left-wing falsehood used to whip up hysteria that will lead to the left’s control of the economy and society.

And that takes us back to the children: If you can’t sell your hysteria to adults, try kids. And that is what the left has done. After all, no one is as malleable or as easily indoctrinated as children.

Consider this: If the left didn’t tell them the world is going to end, they wouldn’t worry about it. They’d be enjoying their young lives, maybe even learning to appreciate that they live in the freest country at the most prosperous time in human history. Instead, thanks to leftists (who are children in adult bodies), they live in their grip of “existential eco-anxiety.”

This is but one more way in which the left abuses children (along with telling them they are neither boys nor girls but whatever they later choose to be; teaching them contempt for their country; and depriving them of the greatest source of morality, meaning, community and happiness — any of the Judeo-Christian religions).

The scariest movies are those featuring brainwashed children. This horror show is happening in real life.

Dennis Prager is a nationally syndicated radio talk-show host and columnist. His latest book, published by Regnery in April 2018, is “The Rational Bible,” a commentary on the book of Exodus. He is the founder of Prager University and may be contacted at dennisprager.com.