As we reported last week…

Democrats are using an anonymous anti-Trump CIA operative in their latest attempt to impeach US President Donald Trump.

It has widely been reported in the past week that Eric Ciaramella is the name of the anti-Trump CIA whistleblower.

Last Wednesday night The Gateway Pundit received several warnings from Facebook that we violated community standards and our account is “at risk of being unpublished.”

We were also notified from our readers that anyone who reposted our articles were ALSO THREATENED to be unpublished.

And we are not alone.
Any conservative publisher who put out the name of the whistleblower were threatened to be unpublished.

For the record– It is NOT against the law to publish the name of the anti-Trump whistleblower… That is a lie pushed by the liberal media.

On Friday Facebook ADMITTED they were deleting any mention of the anti-Trump CIA whistleblower.

Facebook says it is removing “any and all mention of the potential whistleblower’s name” from its platform. 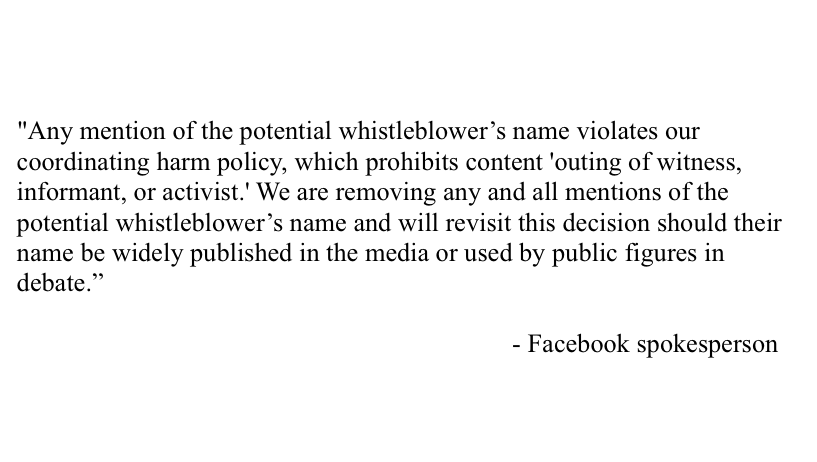 1,779 people are talking about this

And now Wikipedia is preventing Americans from seeing the truth.
Wikipedia is removing ALL mentions of anti-Trump whistleblower Eric Ciaramella.

As reports circulated identifying Eric Ciaramella as the alleged “whistleblower” driving efforts to impeach President Donald Trump, Wikipedia editors attempted to mention him in articles on the site. However, Wikipedia admins used their advanced privileges to delete records of his name, block creation of pages on Ciaramella, and even banned his name completely.

After Donald Trump Jr. and numerous others on social media discussed media coverage naming the alleged whistleblower as CIA analyst Eric Ciaramella, Wikipedia editors began trying to add the name to the Trump-Ukraine controversy article. Page logs show the information has been repeatedly removed and revisions containing the name deleted as “Grossly insulting, degrading, or offensive material” by left-wing admins. Those adding the name were threatened with bans.

Prior to Trump Jr. sharing Ciaramella’s name, editors also attempted to add him to the whistleblower page, but those edits were labeled “vandalism” and removed. Editors also attempted to draft a page on Ciaramella noting him as the alleged whistleblower. The drafts were deleted as “attack pages” even when previews suggest the page was neutral. Administrator “Drmies” a.k.a. Michel Aaij used his privileges to block editors from recreating the Ciaramella page. When editor “Wumbolo” challenged these actions, he was banned and administrators created a filter to prevent anyone from even mentioning the alleged whistleblower’s name.

The liberal left is preventing Americans from seeing the truth.

They know the truth will kill their latest coup attempt.
So they hide it from Americans.