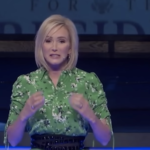 The White House recently announced that White, who previously served as the senior pastor of New Destiny Christian Center in Florida, would officially spearhead Trump’s Faith and Opportunity Initiative. Since taking on the official role, the prominent televangelist has continued to sell religious items that she claims will provide spiritual and material benefits to buyers. “This ‘prosperity gospel’ scam by ⁦@Paula_White⁩ tests the boundaries between ‘religious freedom’ and criminal mail fraud and wire fraud,”

Painter argued in a Wednesday morning tweet. “‘Send me money and God will make you rich.’ Now she uses her White House position to make her sales pitch.” On Tuesday, Painter raised related concerns about White. “Paula White now is running her faith-based Ponzi scheme from inside the White House,” he wrote in a tweet, sharing a link to a Newsweek article that reported on criticism of Trump’s adviser. ‘”Send me your January paycheck and God will pay you back with interest …. [perhaps out of somebody else’s February paycheck],’” he added. READ MORE