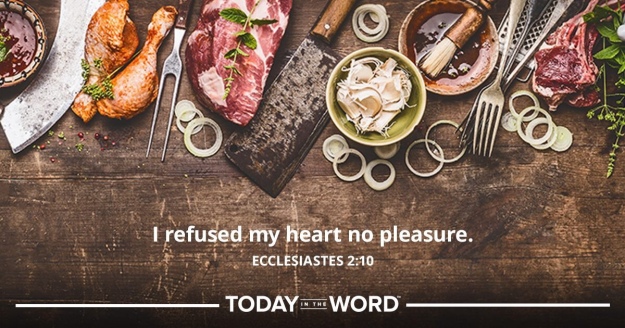 10 Qohelet makes it clear in v. 10 that he exercised no restraint, no self-denial in his pursuit for meaning in sensual pleasure. In light of the preceding verses we may not limit his exploration to the “higher” pleasures. He explored fully the delights of wine, women, and song, as well as architecture and gardening. What is new in this verse is that Qohelet believed pleasure was a consequence of his efforts (see comment below on reward).

James Crenshaw is correct in pointing out that his experiment is at odds with Numbers 15:39: “You will have these tassels to look at and so you will remember all the commands of the Lord, that you may obey them and not prostitute yourselves by going after the lusts of your own heart and eyes.” The sentiment is also far from the statement of humility expressed by the psalmist in Psalm 131:1.

in all my toil. The preposition here is min and not the usual bᵊ. This led some ancient copyists to emend the text accordingly (see the note in BHS). There are analogies, however, elsewhere in the biblical text (Prov. 5:18; 2 Chron. 20:27).

One of Qohelet’s favorite words is toil (see the discussion in 1:3). The issue here is whether toil indicates all the labor that Qohelet performs under the sun or simply refers to his efforts to discover meaning in material pleasure. In either case the negative connotations of the word need to be taken into account.[1]

2:10 delight … reward. Qoheleth’s quest has not brought him the proﬁt or advantage he seeks, but he has found reward in his toil. The Hebrew word for “reward” often means “portion” or “lot,” and Fox says the word refers to “something one gets, irrespective of whether it is adequate or satisfying or deserved or durable.”10 In Ecclesiastes “reward” or “lot” (see 3:22; 5:18–19; 9:9) involves both resources and opportunity. A person’s lot may include few resources or abundant resources but little opportunity to enjoy, and one’s lot in life may change over time. Just as a person’s lot in life is related in some inexplicable way to God’s providence (1:13), it is also related to choices that we make throughout life. Trying to understand this is one of the unfathomable mysteries that perplexed Qoheleth.[2]

2:10 In his search for satisfaction, he had placed no limits on his expenditures. If he saw something he desired, he bought it. If he thought he’d enjoy some pleasure, he treated himself to it. He found a certain sense of gratification in this ceaseless round of getting things and doing things. This fleeting joy was all the reward he got for his exertions in pursuing pleasure and possessions.[3]

Ver. 10.—Whatsoever mine eyes desired. The lust of the eyes (1 John 2:16), all that he saw and desired, he took measures to obtain. He denied himself no gratification, however foolish (ver. 3). For my heart rejoiced in all my labour; i.e. found joy in what my labour procured for it (comp. Prov. 5:18). This was the reason why he withheld not his heart from any joy; kept it, as it were, ready to taste any pleasure which his exertions might obtain. This was my portion of all my labour. Such joy was that which he won from his labour. He had his reward, such as it was (Matt. 6:2; Luke 16:25). This term “portion” (cheleq) recurs often (e.g. ver. 21; Ch. 3:22; 5:18, etc.; so Wisd. 2:9) in the sense of the result obtained by labour or conduct. And what a meagre and unsatisfying result it was which he gained! Contrast the apostle’s teaching, “All that is in the world, the lust of the flesh, and the lust of the eyes, and the vain-glory of life, is not of the Father, but is of the world. And the world passeth away, and the lust thereof: but he that doeth the will of God abideth for ever” (1 John 2:16, 17).[5]