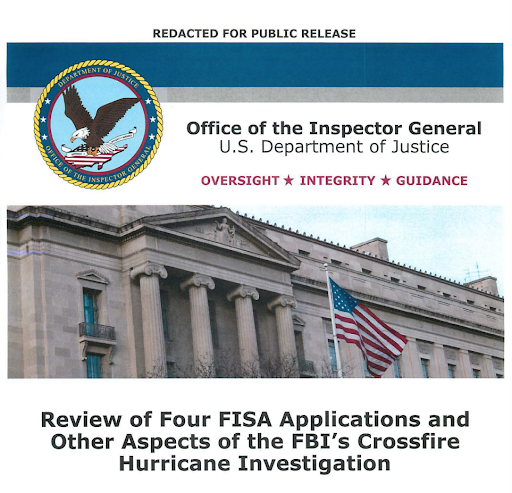 “No testimonial nor documentary evidence of political bias!!” Anti-Trump hatred is the flashing neon light on every page of the IG Report.

The left media spent yesterday furiously spinning their interpretation of what the DOJ’s IG Report had to say: that Horowitz report proved there was no bias behind the abuse of the FISA court warrants the FBI secured by lying outright and omitting all exculpatory material.  Of course, not one of those left-media types bothered to read the nearly 500-page document.  They relied on the headlines extracted from the summary of the project.

Why Horowitz insisted he found no “testimonial nor documentary evidence of bias” is a mystery.  Was he trolling the Democrats who are consumed with impeachment madness or  was he relying on the obvious fact that no one copped to being part of the attempted coup?  Who knows?

“No testimonial nor documentary evidence of political bias!!”

Schiff and his cohorts are now stating openly that the American people cannot be trusted to elect the president. The House Intelligence Committee Chariman has worked very hard to make Americans distrustful of our electoral process over the last three years.  He is a pathological liar who is in a position of power; he is dangerous.  He is not driven by any love of country or the Constitution, he is driven by hatred for President Trump.  It is that hatred that radiates from his eyes every time he appears on television.

Not once has he waited for facts before making all manner of accusations — as if whatever he wants to be true will be true.  But little that he has said over the last three years has proven to be true. He is a menace.

Why does no one within his party moved to stop him? Insist he be removed?   It is Schiff who is seriously abusing his power.  He is dragging his party further into the gutter of irrelevance than Pelosi!

The desperation of the Democrats is showing, most clearly via their rush to impeachment.  None of their 2020 candidates can gather much of a crowd, especially compared to the tens of thousands who show up to see, hear and cheer President Trump.  If Hillary thinks she can beat him this time she is sadly mistaken; Trump puts America first and his supporters know this.

Obama never put America first, ever.  He set about taking us down a few pegs and he did.  He gave no aid to Ukraine when they were under attack by Russia, but gave billions to Iran so they could accelerate their nuclear program…  and they have.  Obama embraced his declining economy as the new normal.

Trump, on the other hand, has revitalized our economy and effected the lowest unemployment ratein decades.  That is why those tens of thousands of people show up to support him.  He’s made their lives better.  Many of them did not vote for him in 2016 but will in 2020.

Whether or not he meant to, Horowitz sort of tricked the Left into thinking his report would come down on their side but it most definitely did not.  It is a frightening account of how treacherous Comey, Brennan, Clapper and all the underlings they conscripted into their conspiracy are; they have collectively put the nation through a three-year nightmare of their own making, one for which there was no basis at all.

Schiff, Pelosi and Nadler, are all dimwitted worker bees who picked up the mantle and doubled down on the scheme.  They probably thought that being the loudest on the bandwagon would feather their nests, with money and devotion.  Instead they’ve made fools of themselves.  Even