Speaker Pelosi and Democrat Rep. Adam Schiff are both connected to a Ukrainian arms dealer. This is why they lie in front of the nation. They are afraid of their own deeds being uncovered!

As reported this morning [September 29th], Adam Schiff leads the House Intelligence Committee and this past week he oversaw the Intel Committee where he attempted to align President Trump with some ‘trumped’ up allegations concerning his phone call with the President of the Ukraine.

Schiff lied in his opening remarks and claimed numerous falsehoods about the President’s call in spite of the transcript being provided the day before.

His entire description of the President’s call was a lie – we have the transcript and this was not in it!

We know why Schiff is lying – he’s connected with a Ukrainian Arms Dealer!

In 2013 Ukrainian Igor Pasternak held two different fund raisers for Schiff asking for contributions between $1,000 and $2,500 –

Pasternack has also been connected to George Soros –

Congressman Adam Schiff (D) had a fundraiser hosted by a Ukraine arms dealer with heavy ties to George Soros! #ComeyHearing 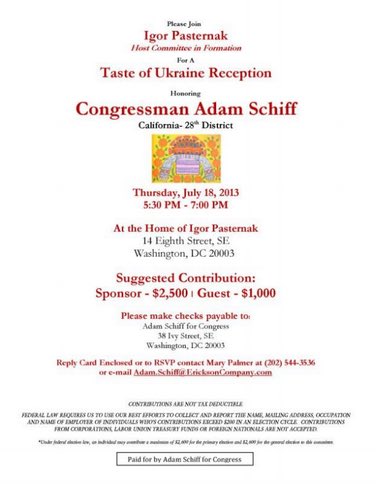 1,654 people are talking about this
Pasternak is an arms dealer. He has sold arms in places like Syria –

Below is Pasternak’s luxurious home in DC where he held fundraisers for the Democrats.

There is much more to this Ukrainian Arms Dealer that can be found at this link. Of course, Obama’s Secretary of State Kerry, his Vice President Biden and DNC operative Alexandra Chalupa are all connected.  Chalupa is connected to the Steele dossier as well as Ukrainians and Democrat leaders.

Ironically, Pasternak also was in the massive crowd at President Trump’s inauguration –

Rudy Giuliani confirmed our reporting by way of FOX News ==>>

(Fox News) House Intelligence Committee Chairman Adam Schiff, who has played a leading role in investigating the Trump-Ukraine scandal, is facing questions about his own connection to a Soviet-born businessman who has raised money for his campaign and whose company has received lucrative defense contracts from Ukraine’s government.

That man is Igor Pasternak, the founder and CEO of Worldwide Aeros Corp., which makes blimps for military and commercial customers. His business has also been involved in weapons manufacturing, working with the Ukrainian Ministry of Defense to produce a modified version of the M4 and M16 rifles, according to reports.

In 2013, Pasternak hosted a fundraiser in Washington for Schiff, who later came to embrace a strong stance in support of the United States sending military aid to Ukraine during its conflict with Russia.

“Before this time, Schiff rarely, if ever, mentioned Ukraine,” Fox News’ Laura Ingraham said on her show Thursday night, after detailing Schiff’s connection to Pasternak. “But after the fundraiser, he used multiple television appearances to basically demand that we send money and arms to them.”

This information that Rudy linked to was at the rightwingtribune.com.

Speaker Pelosi and Shifty Lying Schiff are after the President for a phone discussion he had with the Ukrainian leader but they took money from a Ukrainian arms dealer.

Is this why they lie and push for impeachment of President Trump – to protect themselves and their handlers?

via REMINDER: PELOSI AND SCHIFF BOTH CONNECTED TO UKRAINIAN ARMS DEALER — The Gateway Pundit