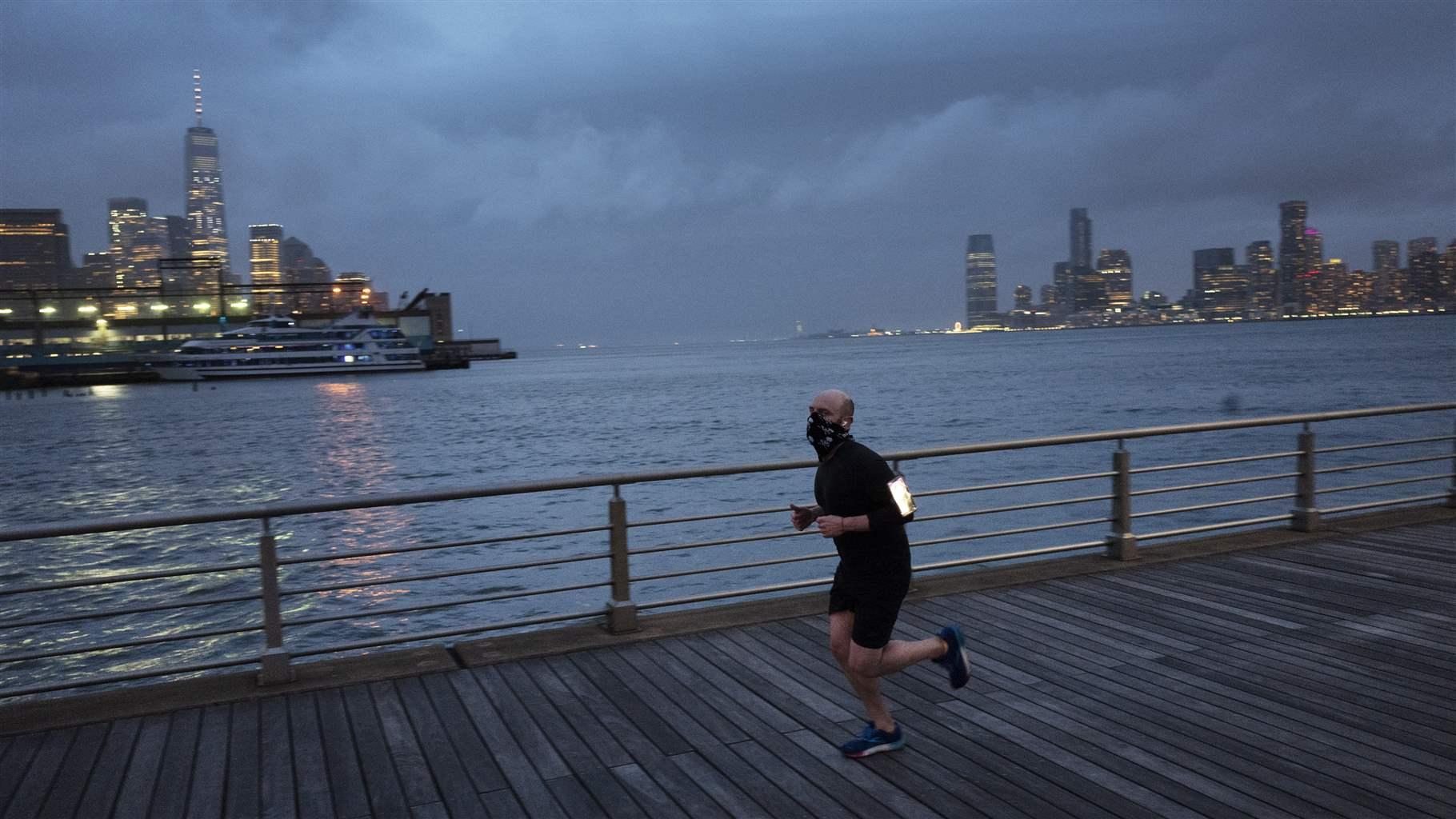 A jogger wears a face mask in New York’s Hudson River Park last month. Many Americans who used to manage their anxiety with exercise are now finding that doesn’t cut it under the stress and the isolation of the coronavirus epidemic. Mark Lennihan/The Associated Press

Editor’s note: If you or someone you know needs help, call the National Suicide Prevention Lifeline 1-800-273-8255. Other mental health call and text lines can be found below.

At Provident Behavioral Health in St. Louis, people who called the helpline at the beginning of the pandemic were fearful, even panicked.

“Nearly everyone expressed fear. Fear of catching the virus, fear of the future, fear of the unknown and fear of not knowing how to cope with their feelings,” said Jessica Vance, who manages the Disaster Distress Helpline at Provident.

Now people’s calls and texts, which have leveled off in the past couple of weeks, are more about their isolation and depression.

Nationwide, mental health call and text centers, the first lines of defense for many people feeling jittery during a crisis, offer an early picture of how Americans are coping with the coronavirus pandemic.

Many crisis centers are reporting 30% to 40% increases in the number of people seeking help. The helpline at Provident is experiencing a tenfold increase compared with this time last year, when no national disaster was occurring. So far, the nation’s most heavily used helpline, the National Suicide Prevention Lifeline, has not seen a spike in call volume.

Ultimately, the psychological impact of the pandemic will harm far more people than the virus itself. And the widespread emotional trauma it’s evoking will be long lasting, experts say. Already, more than 4 in 10 Americans say that stress related to the pandemic has had a negative impact on their mental health, according to an April poll by the Kaiser Family Foundation.

“There’s no doubt that the coronavirus pandemic will be the most psychologically toxic disaster in anyone’s lifetime,” said George Everly, who teaches disaster mental health and human resilience at the Johns Hopkins Bloomberg School of Public Health.

Based on Americans’ reactions to previous disasters, the emotional phases people can be expected to go through are predictable, Everly said. “But how many weeks or months those phases will last, I can’t tell you.”

For now, starting the third month of the crisis, a sense of shared experience and a felt need to stay strong and fight a common enemy may be keeping many people from emotional collapse and suicide.

But as time wears on, more extreme psychological effects of the pandemic’s widespread trauma can be expected to surface, said Jerry Reed, senior vice president at the Education Development Center and member of the National Action Alliance for Suicide Prevention.

“When the pandemic wanes and most Americans return to work and school, disillusionment, depression and despair will likely arise for some people,” Reed said. “That’s when we could see an increase in suicides.

“But that’s only if we fail to prepare. We know that suicide is preventable,” he said. “Let’s take advantage of the time we have now and try to get ahead of the curve rather than waiting.”

More than 47,000 people in the United States died by suicide in 2017, making it the 10th-leading cause of death, according to the Centers for Disease Control and Prevention. The same year, 1.4 million adults attempted suicide and 10.6 million reported seriously considering suicide, according to the Substance Abuse and Mental Health Services Administration.

The suicide rate in the United States has risen 30% since 2000, with the highest prevalence among middle-aged white men. At the same time, deaths from drug overdoses and alcohol abuse have risen sharply, resulting in a decrease in American life expectancy for three consecutive years.

This rise in what are called deaths of despair, social scientists say, is caused by worsening economic conditions and social isolation in much of the nation over the past two decades.

Last week, a mental health advocacy nonprofit released an analysis predicting that the massive job losses resulting from the economic shutdown during the pandemic, compounded by increased social isolation, could lead to an even sharper increase in deaths of despair.

The coronavirus pandemic, which has killed about 79,000 Americans, could lead to another 75,000 deaths from alcohol and drug misuse and suicide, the analysis projected.

National disasters in the past have resulted in higher suicide rates in the months and years after the initial crisis. But it’s too soon to know whether this pandemic already is causing more suicides. National data on the cause of deaths is collected by the CDC from state death certificates and lags two years behind.