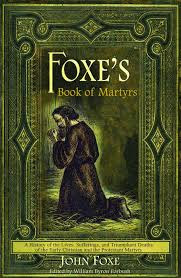 Foxe’s Book of Martyrs. According to this summary from Christian Book Summaries,

Writing in the mid-1500s, John Foxe was living in the midst of intense religious persecution at the hands of the dominant Roman Catholic Church. In graphic detail, he offers accounts of Christians being martyred for their belief in Jesus Christ, describing how God gave them extraordinary courage and stamina to endure unthinkable torture.

From the same link, the book’s purpose was fourfold: