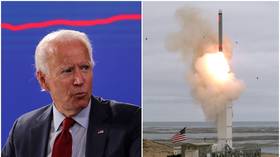 The Democratic Party’s 2020 electoral platform includes a call to end the US’ “forever wars” – which sounds great, except that a Democratic president started many of those wars and the party has stonewalled efforts to end them.

“Democrats know it’s time to bring nearly two decades of unceasing conflict to an end,” the platform, released in draft form on Monday and expected to be approved by Democratic leaders later this week, reads.

It’s a relatively uncontroversial statement in itself: at nearly 19 years and counting, the US war in Afghanistan is the longest conflict in American history. The various satellite wars that have sprung up as part of the “War on Terror” have devastated large swathes of the Middle East – and the US itself, which has spent upwards of $6 trillion on fighting them while much of the country slid into a permanent recession – over the past two decades.

However, the responsibility for many of those satellite conflicts lies with Democrat Barack Obama’s administration, which liberally bombed Syria, Libya, Pakistan, Yemen, and Somalia in addition to Afghanistan and Iraq, turning the already-disastrous two-front War on Terror of his predecessor George W. Bush into a regional quagmire. Democratic candidate Joe Biden was Obama’s vice president, cheering those wars on and defending his boss’ decisions. Now, the party wants Americans to believe only he can put an end to them.

The 2020 platform promises a “durable and inclusive political settlement in Afghanistan” along with an end to US support for the Saudi-led war in Yemen and a repeal of the threadbare 2001 Authorization for Use of Military Force (AUMF) that has been repeatedly (mis)used to excuse US interventions in the Middle East under the guise of fighting terrorism. All great ideas, but the party has been here before.

Despite receiving the Nobel Peace Prize shortly after his inauguration, Obama didn’t bring the peace he promised in his 2008 campaign – he just made war more palatable to the liberals who had previously protested against it. By dramatically expanding the US drone program and cloaking murderous airstrikes in the warm fuzzy rhetoric of spreading democracy and “responsibility to protect,” Obama, his Secretary of State Hillary Clinton, and the Democrats in his administration took the wars out of sight, and out of mind for the average American.

Even while taking credit for “ending” the war in Iraq, launched in 2003 on the fraudulent pretext that leader Saddam Hussein was amassing weapons of mass destruction and/or was somehow involved in the 9/11 terror attacks, Obama subsequently returned US troops to Iraq under the pretext of fighting the Islamic State terror group (IS, ISIS/ISIL). However, IS is widely considered an outgrowth of the US’ botched Iraq policy, which destabilized the region by flooding the country with many of the suddenly-unemployed (but still well-armed) remnants of Saddam Hussein’s military. At the same time, the CIA has a long history of supporting terror groups that dovetail with its political aims, from arming and training al-Qaeda’s predecessors to fight the Soviets in Afghanistan to arming and training so-called “moderate rebels” whose tactics are often indistinguishable from ISIL or al-Qaeda to take out the Syrian government. Terrorism has thrived amid the war “against” it.

That the Democrats should campaign in 2020 on ending forever wars suggests they might have learned something from 2016, when then-candidate Donald Trump pledged to do just that, luring disaffected liberals who couldn’t bring themselves to vote for notorious warmonger Hillary Clinton. Her flippant dismissal of the brutal murder of Libyan leader Muammar Gaddafi – “We came, we saw, he died!” – remains chilling years after she helped reduce the country with the highest standard of living on the African continent to a failed state where slaves are sold in open markets.

But while Trump has profoundly failed to keep his end-the-wars promise, instead increasing the number of drone strikes beyond Obama’s sky-high levels, even Trump’s minimal efforts to withdraw troops from Syria and Afghanistan have been ferociously opposed by the Democrats.

Indeed, the only foreign policy acts the self-styled #Resistance has praised from their political nemesis have been his bombings of Syria in response to extremely dubious reports of gas attacks by the Assad government. CNN’s Fareed Zakaria claimed the strike represented the day Trump “became president of the United States.”

The disingenuous call to end the military quagmires is far from the only lofty pledge embedded in the Democrats’ platform, which alternates between eye-rolling social-justice pandering and common-sense measures with broad appeal.

The party has also pledged to “end the Trump Administration’s politicization of the armed forces,” improve healthcare for veterans, “root out systemic racism from our military justice system,” and “prioritize more effective and less costly diplomatic, intelligence and law enforcement tools” over military invasions in conducting foreign policy.

It remains to be seen which, if any, of those promises they will keep.