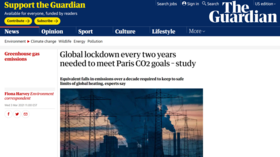 The Guardian accidentally confirmed the suspicions of a whole lot of conspiracy theorists with an article suggesting a “global lockdown every two years” was needed to meet Paris climate goals. The title was quickly changed.

If carbon dioxide emissions don’t drop by the equivalent of a worldwide lockdown “roughly every two years” for the next decade, the earth will heat to apocalyptic levels, a team of researchers at the University of East Anglia warned in a Nature article published Wednesday.

Evidently I wasn’t the only one who thought the original headline was terrible – the Guardian changed the title, eliminating the suggestion that we need a lockdown every 2 years. 👏👏

Despite calling for “completely different methods” to achieve and lock in the emissions drop from the pandemic, lead researcher Corinne Le Quéré nevertheless insisted that climate change couldn’t be a “side issue. It can’t be about one law or policy, it has to be put at the heart of all policy.”

Every strategy and every plan from every government must be consistent with tackling climate change.

While Le Quéré didn’t come out and suggest people be arbitrarily deprived of their liberties every two years in order to please a climate model, the other “strategic actions” she mentioned to keep some of the gains of the pandemic were already being implemented – and in many cases had been implemented for years. From city planning to incentivize “active transport” (walking and cycling) and growing public transportation, to promoting remote work where possible, her suggestions were not exactly new – and unlikely to convince anyone they were sufficient enough.

“There is a real contradiction between what governments are saying they are doing to do [to generate a green recovery], and what they are doing,” Le Quéré told the Guardian, calling the phenomenon “very worrisome.”

Her co-researcher Glen Peters was more explicit in what latitude countries should have to move away from fossil fuels on their own time, calling for “structural changes” to move economies toward renewable energy.

Some on social media, seeing the “quiet part” said out loud on the first edition of the Guardian article, had an “I told you so” moment. The threat of ‘climate lockdowns’ has been alternately presented and “debunked” by mainstream media for months.

Two years on, one year off. Sounds great…especially for the tens of millions in the developing world who will starve during the mass famines to follow.

As long as Uber Eats keeps showing up at the door, who cares, right?

…others at first assumed it had to be satire, because no one would post something that on-the-nose –

I thought that was a Babylon Bee article

…except maybe for the World Economic Forum, which actually posted in praise of what lockdowns had done to cities – presumably turned them into uninhabitable hives of snitches where one can’t even take in a Broadway show anymore – earlier this week, before removing its tweet under public pressure.

The WEF had posted a video praising the “silence” and clearer air – and lack of humans, though they didn’t say that part out loud.

2 thoughts on “Lockdowns or the planet gets it? Guardian ‘accidentally’ suggests Covid-like shutdowns every 2 years to meet Paris climate goals — RT World News”