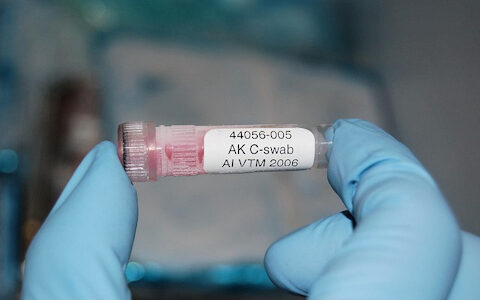 CDC sued for massive fraud: Tests at 7 universities of ALL people examined showed that they did not have Covid, but just Influenza A or B – EU statistics: ‘Corona’ virtually disappeared, even under mortality.

A clinical scientist and immunologist-virologist at a southern California laboratory says he and colleagues from 7 universities are suing the CDC for massive fraud. The reason: not oneof 1500 samples of people tested “positive” could find Covid-19. ALL people were simply found to have Influenza A, and to a lesser extent Influenza B. This is consistent with the previous findings of other scientists, which we have reported on several times.

Dr. Derek Knauss: “When my lab team and I subjected the 1500 supposedly positive Covid-19 samples to Koch’s postulates and put them under an SEM (electron microscope), we found NO Covid in all 1500 samples. We found that all 1500 samples were primarily Influenza A, and some Influenza B, but no cases of Covid. We did not use the bulls*** PCR test.’

At 7 universities not once COVID detected

‘When we sent the rest of the samples to Stanford, Cornell, and a couple of the labs at the University of California, they came up with the same result: NO COVID. They found Influenza A and B. Then we all asked the CDC for viable samples of Covid. The CDC said they can’t give them, because they don’t have those samples.’

‘So we came to the hard conclusion through all our research and lab work that Covid-19 was imaginary and fictitious. The flu was only called ‘Covid,’ and most of the 225,000 deaths were from co-morbidities such as heart disease, cancer, diabetes, pulmonary emphysema, etc.. They got the flu which further weakened their immune systems, and they died.’

‘This virus is fictitious’

‘I still need to find one viable sample with Covid-19 to work with. We who conducted the lab test with these 1500 samples at the 7 universities are now suing the CDC for Covid-19 fraud. The CDC still has not sent us a viable, isolated and purified sample of Covid-19. If they can’t or won’t, then I say there is no Covid-19. It’s fictional.’

‘The four research papers describing the genome extracts of the Covid-19 virus never managed to isolate and purify the samples. All four papers describe only small pieces of RNA that are only 37 to 40 base pairs long. That is NOT a VIRUS. A viral genome normally has 30,000 to 40,000 base pairs.’

‘Now that Covid-19 is supposedly so bad everywhere, how come not one lab in the world has completely isolated and purified this virus? That’s because they never really found the virus. All they ever discovered were small pieces of RNA that were not identified as the virus anyway. So what we’re dealing with is just another flu strain, just like every year. Covid-19 does not exist and is fictitious.’

‘I believe that China and the globalists have set up this Covid hoax (the flu disguised as a new virus) to establish a global tyranny and totalitarian control police state. This intrigue included (also) massive election fraud to overthrow Trump.’

CDC itself admits to having no identifiable virus

Deeply hidden in an official document on Covid-19, the CDC ruefully admitted as early as summer 2020 that it does not have a measurable virus: ‘As no quantified (= measured) isolated virus objects of 2019-nCoV are available at this time…’ (page 39 of the ‘CDC 2019-Novel Coronavirus (2019-nCoV) Real-Time RT-PCR Diagnostic Panel’ (July 13) In other words, the CDC, as one of THE leading medical authorities in the world, could not, and still cannot, demonstrate a virus.

About the for this purpose scientifically totally debunked, but still shamelessly abused PCR test, the CDC wrote under the heading ‘limitations’: ‘The detection of viral RNA cannot demonstrate the presence of an infectious virus, or that 2019-nCoV is the causative agent of clinical symptoms.’ And in addition: ‘This test cannot exclude other diseases caused by other bacterial or viral pathogens.’

In other words, we cannot prove that the people who get sick and are hospitalized, and very occasionally die, were sickened by a new coronavirus called SARS-CoV-2, nor can we prove that it caused them to develop a new disease called ‘Covid-19.’ It could just as easily be a different virus and a different disease. (And since all the symptoms, including severe pneumonia, correspond seamlessly to what flu can cause historically in vulnerable people… ‘if it looks like a duck and walks like a duck, it is a duck’.

Reward of $265,000 for demonstrating coronavirus

Earlier this year, Samuel Eckert’s German Team and the Isolate Truth Fund pledged a reward of at least $265,000 for any scientist who can provide incontrovertible proof that the SARS-CoV-2 virus has been isolated and therefore exists. They too pointed out that not one lab in the world has yet been able to isolate this corona virus.

Yes, systems scientists claim they have, but this ‘isolation’ consists only of a sample from the human body, which is a ‘soup’ full of different kinds of cells, remains of viruses, bacteria, et cetera. With the help of (toxic) chemicals one then searches for some (residual) particles that may indicate a virus that once existed or may still exist, after which this is designated as ‘evidence’.

In late December 2020 there was a similar initiative to the one in Germany. A team around Canadian investigative journalist Christine Massey submitted no less than 40 Public Access Law requests to medical authorities worldwide with the simple request for proof that the SARS-CoV-2 virus has been isolated and its existence can therefore be objectively proven. Not one of the agencies and authorities written to was able to provide that evidence.

Dr. Tom Cowan, Dr. Andrew Kaufman and Sally Fallon Morell recently published a statement on “the continuing controversy over whether the SARS-CoV-2 virus is isolated or purified. But based on the official Oxford definition of “isolation” (“the fact or condition of being isolated or secluded, a separation from other things or persons, standing alone”), common sense, the laws of logic and the rules of science dictate that any unbiased person must come to the conclusion that the SARS-CoV-2 virus has never been isolated or purified. As a result, no confirmation of the existence of the virus can be given.’

Not surprisingly, the world’s largest biotech company, China’s BGI, recently launched a new PCR test that can simultaneously test for influenza A, B and corona. Apart from the proven fact, acknowledged trough various lawsuits, that a PCR test cannot prove infection with any virus whatsoever, BGI’s explanation that both diseases are so difficult to distinguish from each other and that they have therefore made only one test, says more than enough. Maybe there IS no difference at all, ‘Covid’ is just another name for ‘old familiar’ flu viruses, and this is just another clever marketing trick?

Most people have been fooled by fear propaganda

With worldwide, government-controlled 24/7 fear propaganda by the mass media, most people have come to believe that there is indeed a life-threatening virus that makes people sick much faster and more severely than seasonal flu. However, even the latter is demonstrably not the case. Influenza A has been the leading cause of death from pneumonia in the developed world for years.

But send people designated as severe Covid patients to a few ICU’s, put cameras on them constantly, instruct a few physicians that they should only discuss the worst cases, and you have your “televised pandemic. The argument ‘we are doing it because otherwise care will be overburdened’ was undermined by governments itself some time ago, by rejecting offers of additional ICU beds or staff, because ‘it is not necessary’. (Was this perhaps the first and only time the truth was told?)

Official figures: nothing to worry about (yet it never gets back to normal)

Now that also the official figures show that after the normal traditional flu season nothing is wrong, and according to the EU statistics(EuroMOMO) there is even a significant lower mortality, the society – if it really was about a virus and public health – should immediately go back to normal to start repairing the huge damage caused by government policies.

However, as you know, that will never be done, and that is because this carefully planned pandemic hoax is carrying out an ideological agenda, the ‘Great Reset’, which aims to largely demolish the society and economy of the West, and then subject it to a global technocratic communist climate-vaccine dictatorship, in which all our freedoms, civil and self-determination rights will be done away with once and for all.

At least that was their plan.

2 thoughts on “Laboratories in US can’t find Covid-19 in one of 1,500 positive tests | Xandernieuws”