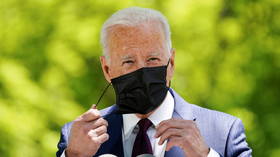 US President Joe Biden removes his face mask as he delivers remarks on the administration’s coronavirus disease (COVID-19) response outside the White House in Washington, U.S., April 27, 2021. ©  REUTERS / Kevin Lamarque

President Joe Biden frantically searched for his mask during a speech in Georgia, telling supporters he was “in trouble,” despite the fact that the president was both outside and fully vaccinated.

During an event in Duluth on Thursday to mark 100 days in the White House, Biden was filmed at the podium desperately searching for his mask to no avail.

“Where’s my mask?” Biden asked as he searched through his folder and looked around the podium. Still unable to find it, First Lady Jill Biden then took over for her husband, also rummaging through his folder while the president told supporters through his microphone, “I’m looking for my mask. I’m in trouble.”

Eventually, Biden appeared to find the mask in his pocket and raised his arm in celebration.

Americans on social media were quick to question why Biden even needed a mask since the president was both fully vaccinated and outside.

According to new guidelines from the Centers for Disease Control and Prevention (CDC), vaccinated Americans “can gather or conduct activities outdoors without wearing a mask except in certain crowded settings and venues.” Biden also shared the news in a maskless address this week, telling Americans that if they’re “fully vaccinated,” “outdoors,” and “not in a big crowd, you no longer need to wear a mask.”

Though Thursday’s Georgia event could be considered a crowded setting, there were just four people on the stage with Biden – the First Lady and Georgia Senators Raphael Warnock and Jon Ossoff, who were all wearing their own masks.

“Excuse me, but why are all these dweebs wearing masks outside? I thought Biden decreed that vaccinated citizens no longer have to mask up outdoors?” tweeted one conservative social media user, while Biden was also mocked by Republican Arizona Congressman Andy Biggs and others.

A screenshot of Biden in a virtual climate meeting between world leaders last week went viral after it showed him to be the only leader at that moment wearing a face mask. White House Press Secretary Jen Psaki said Biden wore the mask to send a “message” to the world and also because there were others with him in the room at the time.