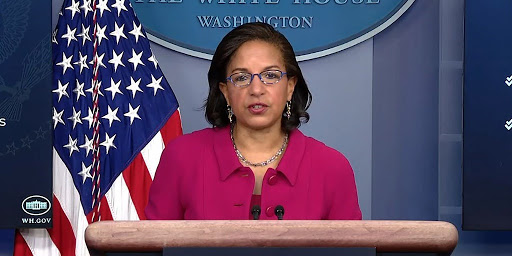 Richard Grenell, the former acting director of National Intelligence under President Trump, said in an interview with CPAC that he believes Susan Rice has assumed the role of a “shadow president.”

Richard Grenell, the former acting director of National Intelligence under President Trump, said in an interview with CPAC that he believes Susan Rice has assumed the role of a “shadow president.”

Rice, who served as national security adviser under President Obama, was tapped last December by President Biden to take charge of the White House Domestic Policy Council. It is in that role that Grenell believes she is exerting her influence.

“Biden is too weak to stop the progressive left from taking over… [Vice President] Kamala [Harris] does not understand what’s going on…We have a shadow president in Susan Rice and no one is paying attention,” he said.

Rice is one of the many officials from the Obama administration that landed jobs in the Biden White House. There was speculation that she would be his running mate and when that never materialized, secretary of state.

She is among the wealthiest individuals in the Biden White House, with a net worth estimated to be at least $37.9 million, according to the Wall Street Journal. She resigned last December from her role as a member of the board of directors at Netflix.

Grenell was interviewed by Matt Schlapp, the chairman of the American Conservative Union, Mercedes Schlapp, his wife and former White House director of strategic communications for the Trump administration.

He said that it is apparent that Biden’s effort to placate the far-left in his party while dealing with significant foreign policy concerns is leading to more headaches.

“The foreign policy mess that they are creating is a mess because they are placating the far-left domestically,” he said. (Grenell predicted in January that he believed Rice would be calling the shots.)

BIDEN SAYS ‘ISRAEL HAS RIGHT TO DEFEND ITSELF’

The White House did not immediately respond to an email from Fox News. The Biden administration has made it clear that it believes the border surge is the result of Trump administration policies.

Ned Price, the State Department spokesman, was asked Monday about a tweet from Rep. Ilhan Omar, D-Minn., who called proposed evictions in Jerusalem essentially “ethnic cleansing,” the New York Times reported. Price said Omar’s claim was “not something that our analysis supports.”

Edmund DeMarche is a senior news editor for FoxNews.com. Follow him on Twitter @EDeMarche.
— Read on www.foxnews.com/politics/grenell-calls-susan-rice-the-shadow-president-and-no-one-is-paying-attention