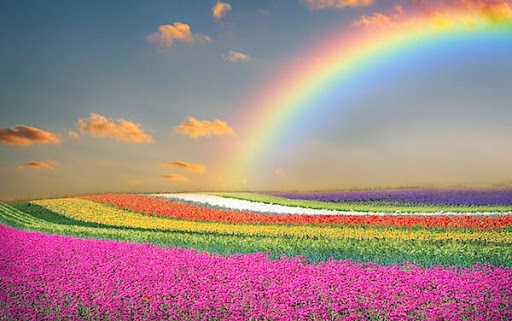 Although gay pride has been celebrated toward the end of June for a few decades in more liberal enclaves of the United States and elsewhere, the treatment of this annual event as a “holiday,” as it were, as well as the entire concept of a “Pride Month” is relatively new.

Yet it has exploded in prominence.

Now, just as Easter is marked with pastels, Halloween with black and orange, and Christmas with red and green, the rainbow, long claimed by the LGBT movement as its symbol of “Pride,” dominates this new national tradition celebrating alternative sexual lifestyles and identities with a full month of pro-LGBT propaganda and corporate advertising campaigns.

The ubiquitous Pride rainbow may be inextricably linked with homosexuality or other LGBT lifestyles for many moderns, but this has not, in fact, always been the case.

Not only is the rainbow an important Judeo-Christian symbol of God’s mercy towards mankind, but it was also actually given to humanity, the Bible tells us, in the wake of the great, global judgement that occurred when mankind fell away from God’s righteousness.

In other words, when humans followed the whims of their own … pride.

Celebrating those whose sexual preferences or gender identities were not maligned by mainstream society now that the culture has more broadly embraced homosexuality and other alternative sexual lifestyles is what the Bible constantly tells us is what so often leads mankind to destruction.

Noah’s Ark is more than just a story that makes for fantastic Sunday School crafts. It is a key biblical narrative of God’s judgement and His grace towards humanity.

After Noah and his seven family members survived the 40 days and 40 nights of deluge aboard the ark, and then many more weeks afloat as the global flood slowly receded, God established a covenant with the family that would go on to repopulate the earth and spawn the nations from which we are all descended.

He signified this covenant with mankind by putting a symbol in the sky as a testament of His mercy — the rainbow.

Then God said to Noah and to his sons with him, ‘Behold, I establish my covenant with you and your offspring after you, and with every living creature that is with you, the birds, the livestock, and every beast of the earth with you, as many as came out of the ark; it is for every beast of the earth. I establish my covenant with you, that never again shall all flesh be cut off by the waters of the flood, and never again shall there be a flood to destroy the earth.’

Last week, the third annual “Freedom March” was held in Washington by men and women who left the LGBT lifestyle after experiencing the love of Jesus Christ.

According to The Christian Post, marchers this year declared a “rainbow revival” as they praised the God who first put this beautiful symbol in the sky, the same God who gave His only son, Jesus Christ, to atone for all the sins of mankind, gay, straight or otherwise.

“We are taking back the rainbow,” said Angel Colon, who survived the Pulse Nightclub shooting in 2016 and later gave his life to Christ and turned from his homosexual lifestyle, according to the Post. “It’s His. For us, it’s something beautiful.”

“We are here and we’re loud, letting the world know that the rainbow is something beautiful,” he also said. “And we shouldn’t be ashamed of what it really is.”

God, the Creator and Lord of the universe, created the rainbow as a symbol of his promise to mankind that he had given us a path to salvation.

As we see this symbol splashed across popular culture to celebrate and glorify the pride with which so many defy God and his design for sexuality, it is all the more important to restore its original purpose.

As there can be no mercy without judgment, the rainbow also reminds us of the judgment which is to come — and the urgency with which we must warn others of the only ark we have to survive that storm.

That is, the saving power of the Lord Jesus Christ.

We must also remember that the same God who made the rainbow, established the covenant with Noah, and died as a man to set us free alsocreated the men and women who now use his symbol to celebrate their sin.

Christians who warn the world that embracing homosexuality is a defiance of God’s laws are increasingly bullied, mocked, maligned and marginalized by mainstream society, just as tradition tells us that Noah was mocked for warning his peers of the coming flood.

The antediluvian world found out the hard way that Noah was right.

Are we going to leave today’s world to suffer in its sin, or will we take up the rainbow — and the calling of its Maker — to warn the world of the price humans may pay if they do not lay down their pride and seek Him while he can still be found?