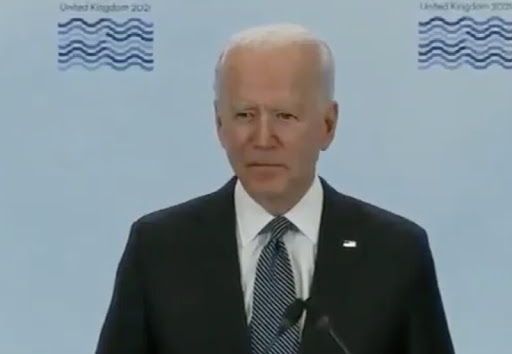 For all of his tough talk about the upcoming meeting with Russian President Vladimir Putin, Joe Biden isn’t going to back up his bravado by participating in the traditional joint press appearance between the leaders of the two nuclear powerhouses.

The 46th president’s handlers have to be horrified at the prospect of a trademark Biden brain freeze on the world stage, especially when compared to the wily Russian leader who would delight in an “emperor has no clothes” moment and would mercilessly exploit it.

There is simply no way that Biden is going to be allowed out in public with Putin, especially after a week’s worth of propaganda at the G7 conference designed with the intention to show that as good old Joe from Scranton likes to say, “American is back.”

But it is of great importance to spin the refusal to trot him out along with Putin to answer questions from reporters so as to not give the impression that Biden is chickening out.

On Sunday, he was given his script and sent out to deliver the message.

Pressed on not having a joint press conference with Russian Pres. Vladimir Putin at their upcoming summit, Pres. Biden says, "this is not a contest about who can do better in front of a press conference or try to embarrass each other." https://t.co/jUIQDxvJmT pic.twitter.com/idk2WHWug8

According to Biden; “I always found, and I don’t mean to suggest the press should not know, but this is not a contest about who can do better in front of a press conference or try to embarrass each other,” he said, “It’s about making myself very clear what the conditions are to get a better relationship are with Russia.”

Biden’s remarks were delivered from the carefully managed environment at the Cornwall Airport in the U.K. but soon he will be departing jolly old England for Geneva for his high-stakes sitdown with Putin.

Biden’s appearance at G7 earned rave reviews from an international press that suffered immensely from having their delicate feelings hurt during the four years that President Donald J. Trump refused to bend a knee to the globalist ingrates who had become accustomed to flattery from U.S. leaders.

However, Biden’s stay in the U.K. wasn’t without gaffes and senior moments, like when he slipped up and got Libya and Syria confused, a flashback to his campaign where he often forgot which state that he was in.

The fact that Biden would mix up the two is unbelievable. After all, he was the sitting vice president under Barack Obama when the three-headed monster of Hillary Clinton, Susan Rice, and Samantha Power successfully lobbied for bombing the hell out Libya, a catastrophic foreign policy blunder that would destabilize the Middle East, lead to the rise of ISIS and result in the murders of untold thousands of innocent civilians who were the Islamic State’s victims.

Biden was also tripped by his misfiring synapses when he embarrassed the U.S. by forgetting that UK Prime Minister Boris Johnson had already introduced the leader of South Africa.

His stumble drew laughter from his foreign counterparts, who are undoubtedly in on the joke that Biden is mentally incapable of leading the world’s predominant superpower.

Such slip-ups would surely be exploited by Putin, who would make mincemeat out of Biden in a real press conference with unscripted questions, something that the real people running the country cannot allow under any circumstances.

One has to wonder though whether it is Putin who they are really afraid of or is it Trump who would ruthlessly hammer Biden in one of the statements that he releases since he has been banned from all social media in the U.S. and who continues to live inside of their heads.