Responding to Anthony Fauci again declaring that he represents science, Senators Ted Cruz and Rand Paul blasted the “hubris” of ” an unelected technocrat,” warning that he has “distorted science” in order to exert “authoritarian control.” 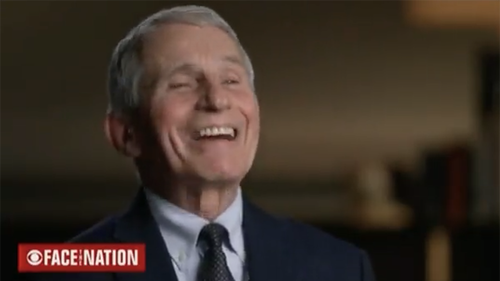 Fauci appeared on CBS News’ Face The Nation, and declared that “Anybody who spins lies and threatens and all that theater that goes on with some of the investigations and the congressional committees and the Rand Pauls and all that other nonsense, that’s noise.”

He further claimed “if you’re attacking me, you’re really attacking science,” adding “I mean, everybody knows that.”

It isn’t the first time that Fauci has essentially declared that he IS science.

Responding directly to Cruz suggesting Fauci needs to be prosecuted, the latter proclaimed “I have to laugh at that. I should be prosecuted? What happened on Jan. 6, senator?”

Real "I am the senate" vibes here. pic.twitter.com/4Y23ROOYKz

Both Cruz and Paul quickly responded:

The absolute hubris of someone claiming THEY represent science. It’s astounding and alarming that a public health bureaucrat would even think to claim such a thing, especially one who has worked so hard to ignore the science of natural immunity. https://t.co/rcDezphVRR

Fauci is an unelected technocrat who has distorted science and facts in order to exercise authoritarian control over millions of Americans.

He lives in a liberal world where his smug “I REPRESENT science” attitude is praised.

Here are the facts:

Sen. Cruz went on to explain the facts…

(1) On May 11, Fauci testified before a Senate Committee that “the NIH has not ever and does not now fund gain-of-function research in the Wuhan Institute of Virology.”

(2) On October 20, NIH wrote they funded an experiment at the Wuhan lab testing if “spike proteins from naturally occurring bat coronaviruses circulating in China were capable of binding to the human ACE2 receptor in a mouse model.” That is gain of function research.

(3) Fauci’s statement and the NIH’s October 20 letter cannot both be true. The statements are directly contradictory.

No amount of ad hominem insults parroting Democrat talking points will get Fauci out of this contradiction.

Fauci either needs to address the substance – in detail, with specific factual corroboration – or DOJ should consider prosecuting him for making false statements to Congress.

Others also weighed in on Fauci’s emperor vibes, with journalist Jeryl Bier noting “This is not helpful in any way. This is almost word for word something a cult leader would say. This persuades no one not already in his corner.”

This is not helpful in any way. This is almost word for word something a cult leader would say. This persuades no one not already in his corner. https://t.co/2VHY1T7C1k

Look, you don’t have to be some Fauci conspiracy theorist to recognize that Fauci’s utility as a trusted public health official has long since expired, and he tends to be a net negative when it comes to clarity and trust.

Now I want to know what Dr Fauci thinks happened on January 6th that Senator Cruz should be prosecuted for.

Genuinely don’t understand the strategy of continuing to have him on Sunday shows almost every week — the audience he can influence only continues to shrink. https://t.co/A2pvzEp1lM

An appallingly bad thing for someone in his position to be saying. Not a shred of humility about any of the things he got wrong, had to waffle on, or later took back or equivocated. Instead goes all Fauci XIV and says “la science c’est moi.” Yikes. https://t.co/tT9AU9MIuR

Is Dr. Fauci under the impression that nobody is being prosecuted for Jan. 6? Or is he saying Ted Cruz should be prosecuted for speech & debate on the Senate floor? https://t.co/N1NxfTCDZ2