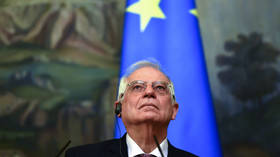 Fears of a military invasion are not rising, says bloc’s chief diplomat

No new information has been revealed that has increased fears of an immediate Russian invasion of Ukraine, the EU’s High Representative for Foreign Affairs has said, as worries over a potential war in Eastern Europe remain high.

Speaking on Monday after talks with US Secretary of State Antony Blinken, Josep Borrell appeared to play down suggestions that Moscow has plans to invade Ukraine in the near future.

“Certainly no, I do not think there is anything new that can increase the feeling of fear about an immediate attack, no,” Borrell said, answering a question from a journalist, also noting he does not believe there is any threat to other countries either, such as Lithuania.

The comments from the EU’s top diplomat come as tensions between Russia and Ukraine remain at an all-time high. In recent months, Western media outlets and politicians have accused Moscow of concentrating 100,000 troops on the border with Ukraine, allegedly with a view to launching an offensive in the near future. The Kremlin has repeatedly denied this accusation.

According to Borrell, Moscow’s movement of troops is designed to increase tensions and split Europe.

“The Russian military build-up in and around Ukraine, and Russia’s attempts to re-create dividing lines on our continent, undermine the core foundations and principles on which European security is built and bring back dark memories of spheres of influence, which do not belong to the 21st century,” he said, noting that the EU gives its “unquestionable support” to Ukraine.

Earlier on Monday, Borrell revealed that the EU would not be following in the footsteps of the US and the UK and would not be evacuating its diplomats’ families out of Ukraine, suggesting that there is no need to“dramatize” the situation.

“We are not going to do the same thing because we don’t know any specific reasons,” he said.

According to Moscow, allegations of a war are “empty and unfounded,” and officials have consistently denied that Russia poses a threat to anyone.