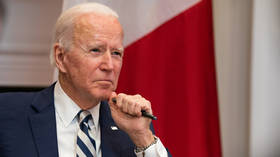 In an interview, the US president appears to mix up the two nations

US President Joe Biden has mixed up the countries of Afghanistan and Ukraine, despite them being more than 3,000km apart, in what was the second major geography gaffe by a senior American official in just one day.

The president needed two attempts to get his country choice correct when answering questions posed to him on Thursday regarding the US’ decision to evacuate troops from Afghanistan last summer, following America’s 20-year military campaign in the country.

“There is no way we were ever going to unite Ukraine. I mean, Iraq. Afghanistan!” Biden said in an interview with US broadcasting company NBC.

The president’s gaffe came straight after answering questions about the ongoing conflict, which is currently the most important topic for American foreign policy. His interview with NBC focused on allegations that Russia has built up more than 100,000 troops on the Ukrainian border. Both Moscow and Kiev are currently running military training drills amidst ever-increasing tensions.

Biden wasn’t the only American official who seemed to struggle grasping world geography on Thursday. On the same day, the US Permanent Representative to the UN Linda Thomas-Greenfield confused Crimea with Ukraine’s Donbass region, when apparently failing to understand the contents of the Minsk II treaty.

These two slip-ups from the US coincide with a high-profile gaffe by British Foreign Secretary Liz Truss, who, also on Thursday, confused the Russian regions of Voronezh and Rostov with areas of Ukraine, and told her Russian counterpart Sergey Lavrov that London would never recognize Moscow’s sovereignty over these areas. According to reports, she was then allegedly corrected by Deborah Bronnert, the British ambassador.